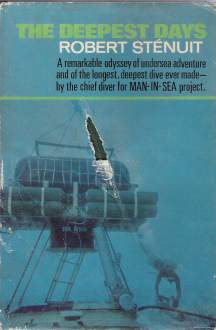 Robert Stenuit is something of a hero of mine because of his efforts to live in the sea. Back in the sixties this seemed an impossible dream and saturation diving had to be invented to cope with it all. Stenuit worked in an undersea house at 432 ft for 49hours a stupendous feat for those days and helped pioneer the way for the Sealab projects.It seems so old hat now but at the time it was more than cutting edge. I can remember being in the Bahamas when they did the World record for a scuba dive on air. It seemed amazing then but now its commonplace. Still, man never did live in the sea, but Stenuit tried harder than most.

His reward was years later when he discovered the Girona treasure ship off the Devils Causeway in N. Ireland.More on that later.