Just before the turn of the century, in spite of all the advances made by steamships, sailing vessels of all shapes and sizes still carried the bulk of Britain’s trade. Whilst fast clipper ships like the Herzogin Cecillie were undoubtedly the glamour boys, sailing barques like the Oregon were the ships that made up the backbone of England’s merchant marine, and carried cargo’s all over the world, often in appalling weather. Today we think that deadlines and clockwatching are modern diseases, but even in those days cargo’s had to be delivered on time or the Captains were likely to be sacked on the spot, especially if the owners lost money. The pressures on the Captain were immense, especially if he had shares in the cargo. With navigation still a chancy business in confined areas like the English Channel, mistakes were bound to happen and if cast on a lee shore like South Devon’s these mistakes usually proved fatal.

On December 18 1890 the Oregon, a steel hulled three masted sailing barque of 810 tons, was in the last stages of her voyage from Iquique in Chile to her home port of Newcastle loaded with a cargo of nitrate of soda. As she came up the Channel towards Falmouth the weather deteriorated with fierce squalls of rain lashing the ship, and her skipper, Capt. Lowe, decided to put into Falmouth to pick up a Pilot. He left later that evening and raced up towards Plymouth in the freezing gale force winds and tumultuous seas, with the night seemingly getting darker and darker. With visibility cut down by the now torrential rain, the Oregon weathered Rame Head and set course for Bolt Head. 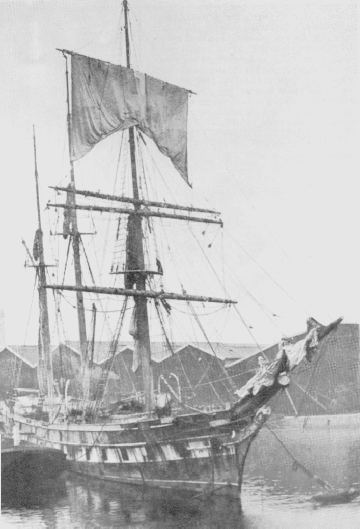 This is not the Oregon but the Cutty Sark. She was very similar to the Oregon and is seen here loading at Chile.

Now if you have ever been on this bit of ocean you will know that it is very easy to actually steer for Bolt Tail instead of Bolt Head, a course that will bring you into the last bit of Bigbury Bay. Why Capt. Lowe and the Pilot made this elementary mistake we shall never know, although in the weather conditions that they encountered it would have been easy enough. What we do know is that late that night the Oregon struck the Book Rocks just off Thurlestone Beach. Capt. Lowe immediately ordered the ship about and managed to claw off the rocks before becoming impaled by the sharp granite reef. Alas his prompt action was to no avail, as the Oregon was badly holed and taking water in very fast. Realising that he would have to abandon the vessel, Capt. Lowe ordered the lifeboats lowered. The first boat was swamped by the huge seas and immediately sank, but the other boat was successfully launched and Capt. Lowe and all his crew managed to scramble into it without losing anybody in the process.

For twelve hours they floated on the stormy sea in complete darkness. With the wind howling and the huge seas crashing down onto the boat it must have been a nightmare. At last one of the crew spotted a light on the shore. It was a local labourer who had heard the barque striking, and with his lamp he guided the Oregon’s lifeboat safely to the little fishing village of Hope where the inhabitants took in the by now nearly dead crewmen and made them comfortable in their own homes. Meanwhile the Oregon, swamped by the mountainous seas, sank soon after her crew left. For her there was to be no safe haven at Hope Cove. 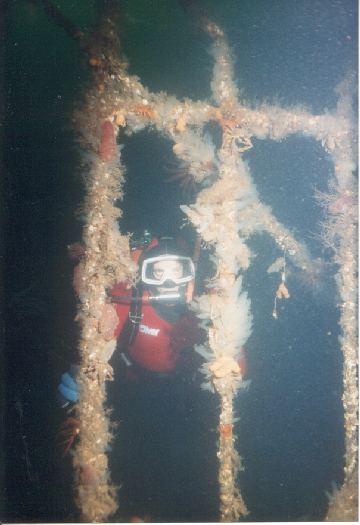 The wreck can be very pretty.

Nowadays the remains of the Oregon lie in 110 feet of water on a flat sandy bottom, and are extremely difficult to find. The marks although easy to locate, allow a certain parallax error, which means that once on the marks you will have to switch on your echo sounder and use that to pinpoint the wreck. It is not easy, but if you are successful the dive is certainly worthwhile providing the visibility is reasonable. The wreck lies as she sank with the bows the most prominent and intact feature, with a large anchor lying nearby in the sand. The Oregon’s sides have collapsed leaving the inside of the hull exposed with all her ribs and keep posts showing, and across her lies one of the masts. She is a very compact wreck and easy to get around in the limited time.

Underneath the rusting iron plates of her hull live quite a number of lobsters who obviously do not see a lot of divers, and small congers also become quite inquisitive when you peer underneath some of the hull plates. Pollock and pouting shoal about this wreck in some numbers, and on the bows some very nice plumrose anemones are attached. Because the wreck is so compact you can hover above it and get to see nearly all the wreck spread out before you, and that is a sight that is worth waiting for. 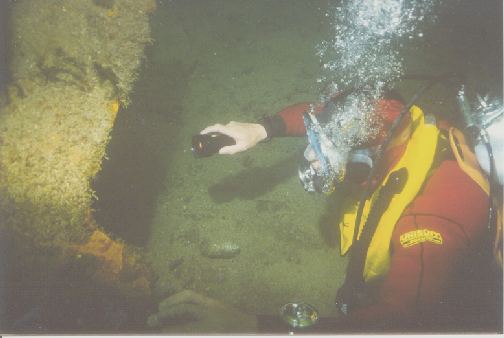 Searching in the crannies.

If you have dived on other sailing vessels like the Herzogin Cecillie, you will get some idea of their relative sizes, and realise how lucky the crew were to get off before she sank. On this wreck however, visibility is all. If the visibility is bad then you will just not appreciate what a pretty little wreck this is. So it is well worth picking your time, preferably a flat calm sunny day, near slack water, and no rain for a few days. (The mouth of the nearby River Avon drops tons of silt over the area after heavy rain). Winter is a very good time if you can crack the cold, as the water gets that wonderful ice blue quality and fifty-foot visibility is a real possibility. By the way, do not be misled by reports that the Oregon is just a few rusting iron plates. The people who say this usually cannot find the wreck. Go and see for yourself.