Midway between Bolt Tail and Bolt Head lies the Hamstone, and just a few hundred yards to the east lie the towering cliffs which surround Steeple Cove. On a summers day Steeple Cove is a delightful place. The gulls and cormorants glide effortlessly amid the clifftops, and occasionally, high in the sky, a hawk can be seen hanging motionless before swooping onto its unsuspecting prey. But in the early hours of 13th December 1932, Steeple Cove was far from being a pleasant place. For surrounded in fog as it was, it nearly became the graveyard of twenty-four seamen who had just been wrecked on the Spanish freighter Cantabria. 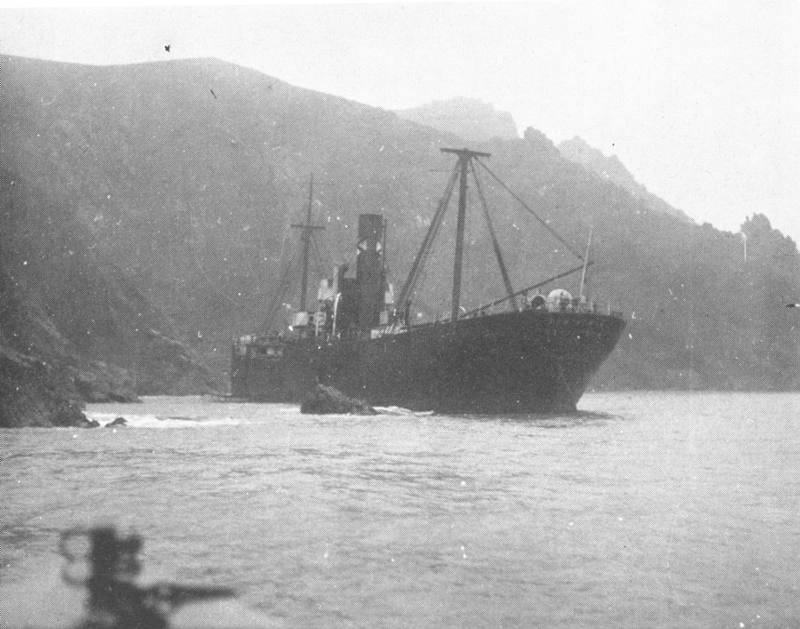 Stern view of the Cantabria.

Heavily loaded with iron ore, the Cantabria was outward bound from Bilbao to Newcastle when she encountered very dense fog off the Devon coast. By early morning the Captain did not have a clue as to his exact position, and soon, almost without any warning at all the Cantabria ran aground on the rocks at the bottom of Steeple Cove. The crew did not have much difficulty launching their boats, and soon they had abandoned the Cantabria and were all heading for the shore. Unfortunately the men had not realised how steep the cliffs were, and having let go of their boats when they jumped for the rocks, they found themselves unable to climb up the cliffs or get back into the lifeboats. It was into this potentially disastrous situation that the Salcombe lifeboat came after painfully groping her way along the coast in the thick fog. By now a heavy ground swell had started up and it had become far too dangerous for the lifeboat to approach the rocks upon which the Cantabria’s crew were trapped. 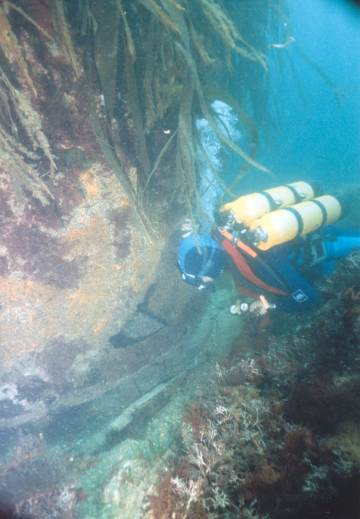 Looking at the bottom of the boiler.

The coxn of the lifeboat however was not short on initiative, and after making the lifeboat fast to the wrecked steamer, he went on board and found a small boat which had been left behind. Using this boat the lifeboats crew, after making a dozen journeys, managed to get all twenty-four people off the rocks and safely into the lifeboat. By now it was obvious that the combination of a very heavy cargo and a severe ground swell spelt the end for the Cantabria. With the continual pounding she eventually went to pieces and soon disappeared beneath the waters, leaving the Cove once more occupied by only the seabirds and the hawks. 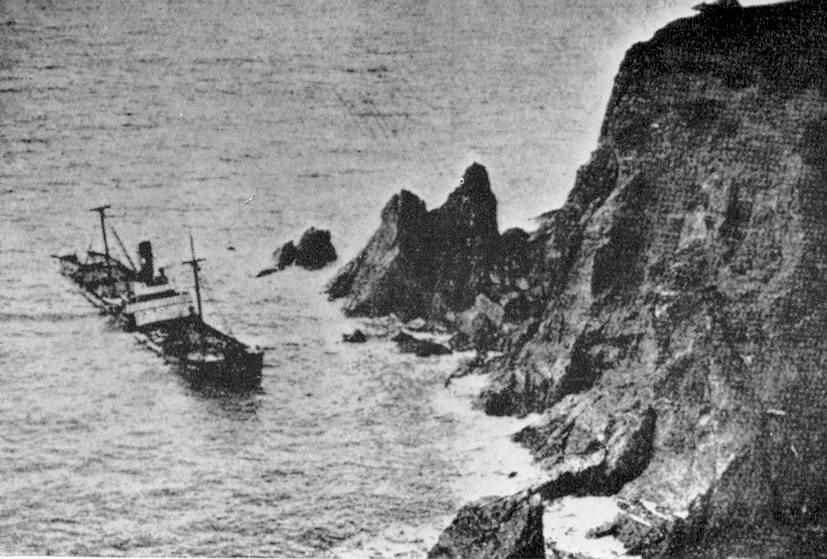 This photo shows exactly where the wreck lies today.

Over the years Steeple Cove has not changed very much and the wreckage of the Cantabria lies almost exactly where she originally ran aground. The photograph shows her position very clearly, and right at the foot of these rocks is where most of the wreckage lies. For a wreck in only thirty-five feet of water the Cantabria is really impressive, and can rival many wrecks in deeper water. Unfortunately the Cantabria was a cheaply built ship and so there is not much in the way of brass or copper. Her propeller for instance, is still there lying on the rocks, but before you all get too excited let me tell you that it is just a common old iron one. Even so this sort of find certainly sets the scene for this wreck. The great majority of the wreck is to be found at the foot of the pinnacle rocks shown in the photograph. 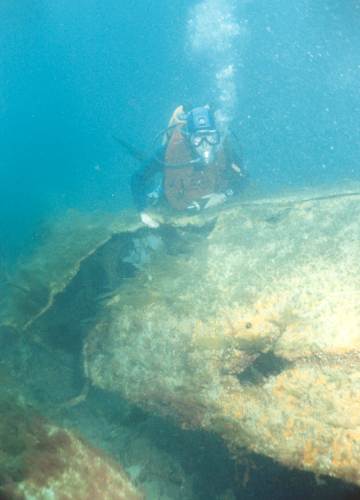 Part of the mid section of the wreck.

Underwater these rocks have fairly broad flat bases which gently fall onto the sand. The boilers, still reasonable intact, lie here surrounded by rusty iron plates and sections of broken guard-rail. Up on a rocky plateau lies the iron propellor, with a large section of decking stretching out across the rocks. Underneath this is a large amount of debris which is well worth poking about in, as sometimes a small brass fitment such as a porthole fastener can be found. Lying across the decking and supported by another rock are the remains of the propellor shaft. This is in quite good condition and will lead you over the other side of the rocks where some more, smaller amounts of wreckage lie scattered. Going back to the main parts of the wreck, further inspection will reveal that large amounts of the decking are most probably the main deck and the one below compressed together, and in some places holes reveal an interior which goes down some four or five feet. A few yards away from the boilers lie of the Cantabria’s anchors with some chain attached.

As you swim away from this towards the other end of Steeple Cove, more small pieces of wreckage can be seen and in the jumble of rocks at the base of the cliffs more anchor chain is to be found, as well as other pieces of iron plating crudded into the rock. You can spend a great deal of time looking around these rocks, because you get the feeling that just behind the next one something really exciting is waiting to be found. All in all the Cantabria is a very underated wreck site. There is certainly plenty to see, and the underwater scenery is far from boring. With it’s shallow depth there is no need to whip around it, and the inquisitive diver can indulge himself by taking plenty of time and really enjoy himself. I suspect that if this wreck was located in deeper water many more divers would flock to it. Still a wreck is a wreck whatever depth of water it lies in. So next time you are in this area make time to give this one a dive. You will not be disappointed.