On the night of 13 September 1913, the self propelled Hopper Barge No 42 arrived off the Plymouth Breakwater after a voyage from Cadiz. With a gross tonnage of just over one hundred and fifty tons, the Hopper Barge was on its way to Southampton after completing a dredging contract in Spain. Her Master, Captain Bun, was in a hurry to enter the Sound and fired off flares to signal a Pilot to come out and guide him in. After a short wait, Captain Bun, beside himself with impatience, determined to enter the Sound on his own and be hanged to the consequences. The night was uncommonly dark, and as the bridge of the Hopper Barge was right at the stern, forward visibility was very poor. Nevertheless Captain Bun ordered half ahead and posted his look outs forward. The Barge had hardly got underway when the Captain saw a large dark shape appear out of the gloom. “What is that black ahead?” he shouted to the lookout. The lookout shouted back over his shoulder “What black?” No sooner had he done this than the barge gave a mighty lurch and cannoned into the Breakwater. 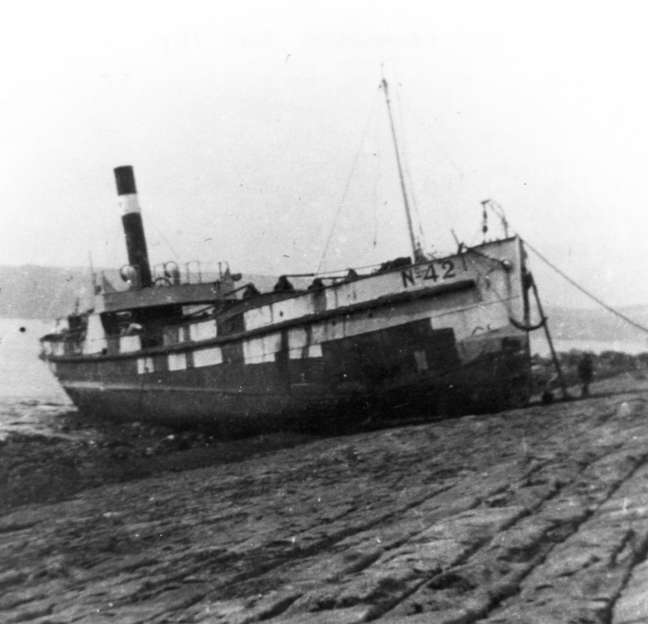 High and dry on the Breakwater.

Almost immediately the hull was pierced and water flooded in, quickly filling all the accommodation and the engine room. The Hopper Barge, much to Captain Bun’s disgust had grounded fair and square, and but for the fact of high tide would have rolled off the edge of the Breakwater immediately. Thankfully nobody was injured, and next morning all the crew assembled together with three tugs to watch the salvage attempts. With pumps installed the Barge’s engine room and accomr!10dation was quickly pumped clear of water and soon the Hopper Barge was refloated and taken in tow. Unfortunately however, the damage to the hull must have been more serious than was realized, because once again the Barge started to take in water. At first the pumps kept pace with the influx, until suddenly the tug masters realized that the Barge looked rather low in the water. Most probably the strain of towing had sprung one or two plates. There was nothing that anybody could do. One minute the Barge was afloat, the next she had sunk. This time it was for good.

Nowadays, what remains of the Hopper Barge lies in fifty feet of water on a bottom of sand and broken shale. Unfortunately she also lies right in the main shipping channel which makes it rather difficult to dive on her. The Breakwater light entrance to Plymouth Sound is used extensively throughout the day by all sorts of large craft. Nuclear submarines in particular use this entrance almost exclusively, and usually moor near to a buoy just inside the Breakwater, near the Fort. Because of this and the attendant security which envelopes Nuke’s, it is absolutely vital that the Queen’s Harbour Master is informed about your intentions. Don’t worry, he will not stop you diving (although he has the power to) but he may well get you to alter your timings.

One other little difficulty is the tide which runs very strongly around the Breakwater light entrance. Even at so called slack water there is a fair bit of movement on the bottom, and to try and dive at mid tide is hopeless as you will just hang on the anchor rope like a flag streaming in a gale. Once you have overcome all these local problems and arrive on the sea bed you will be relieved to find that the visibility is usually very good, around twenty five feet. The sand and broken shell that make up the bottom is very fine, and once kicked up hangs around like a fine mist until the current sweeps it away. The wreckage is laid out very neatly and consists largely of a boiler and what looks like part of the bows. The boiler is reasonably intact and covered in dead mert’sfingers. The bows, or whatever part it is, lies about twenty feet away and provides a very comfortable home for some very large wrasse.

Spread between the two are various worn lumps of metal sticking out from the sand, along with rope, wire hawser and pieces of other rigging. If you dig around in the sand you will find bits of broken crockery and old jars, but I should think that anything else has long since been buried. In fact you get the distinct impression that there is probably as much of the wreck buried beneath the sand and broken shell, as there is showing above it. At first sight this wreck does not look terribly impressive, but it does have a certain charm. Protruding out of the sand it reminded me of as very well kept rock garden. The spider crabs were all in their allotted places, the wrasse in theirs, and only the inquisitive cuckoo wrasse seemed to roam over the entire site tidying up around the broken dead men’s fingers. If you can manage to pick the right time, (slack water) and get permission, then the Hopper Barge makes a very pleasant second dive.