Five thousand years ago when we were all running around trying to invent the mud hut, Egypt was the dominant World power and one of the earliest cultured civilizations of the ancient world. Amongst their many achievements were the earliest agricultural practices and by solar observation the invention of a 365 day year divided into months and weeks. Besides using a great variety of tools, for instance they used huge bronze saws with jewelled cutting points to cut the huge stones used for the Pyramids, the Egyptians also knew how to melt and form copper, mine gold and craft exquisite jewellery. However to most of us they are most famous for their fantastic funereal and burial rites. Nearly everyone has heard of the boy king Tutankhamun and the marvellous treasure placed in his tomb. But this pales into insignificance against one of the true wonders of the world, the Great Pyramid of Cheops at Giza. 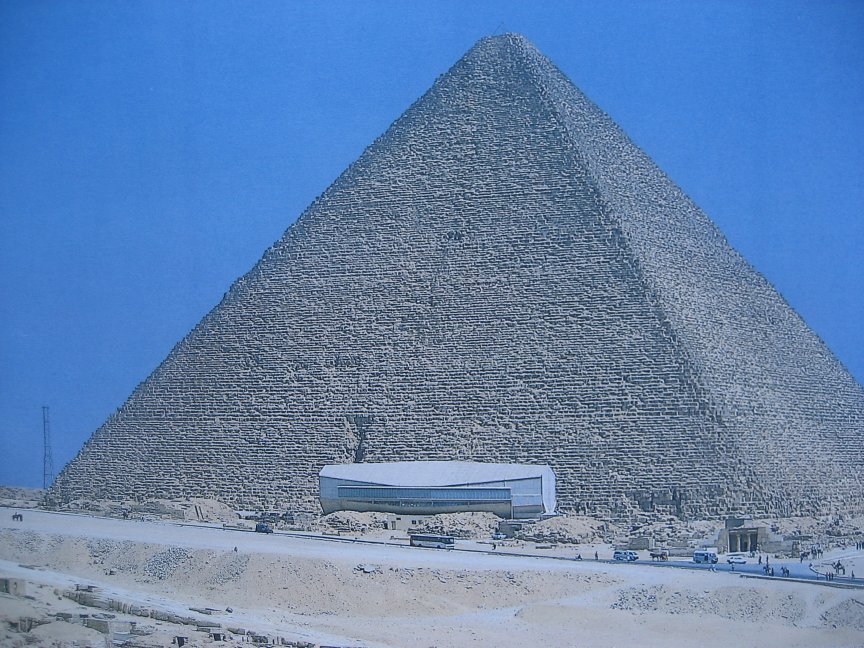 The Great Pyramid with the Sola Boat museum in front.

Built around 2589 BC as the tomb of Pharoah Cheops, it was constructed to survive all humanity, to defy time itself. Although it’s a bit rough around the edges (originally the pyramid would have been sheathed in marble) its sheer monumental scale completely transcends its tacky surroundings at the edge of Cairo and truly awes the insignificant spectator. 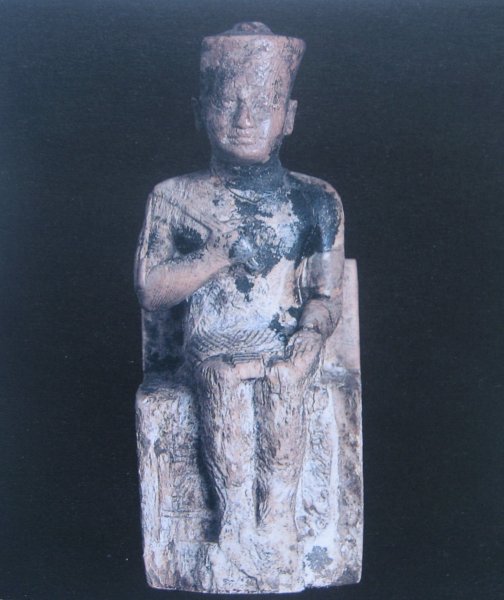 This is the only known image of Cheops.

Not a lot is known about Cheops (he was also known as Kaufu) as his tomb was robbed long before archaeologist ever heard about him. He was the second Pharoah of the fourth dynasty and ruled from about 2589 BC to 2566 BC. He must have been extremely rich and powerful to organize such an undertaking as the pyramid, and contrary to popular belief most Egyptologists now think that much of the work was done by free craftsmen not slaves, as the level of workmanship is too great to have just been done by brutalizes slaves. 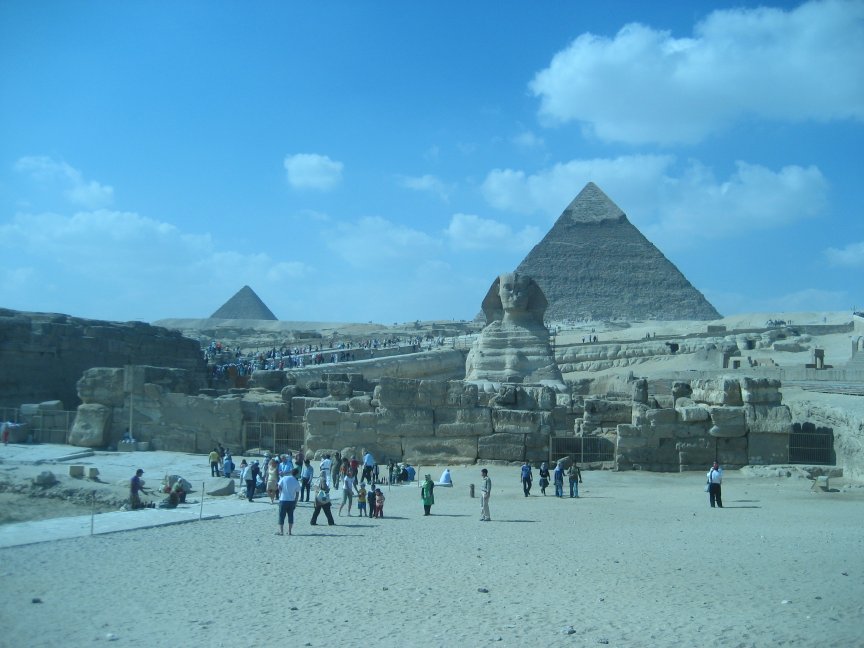 Chepren’s Pyramid and The Spinx.

Cheops had nine sons, and was succeeded by his eldest Djedefre who only reigned briefly, and in his turn was succeeded by Chephren who built another Pyramid next to his father’s and then created the largest and most famous sculpture of all time, the Great Spinx which has Chephen’s head on the body of a recumbent lion. 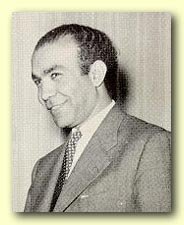 It was customary to bury funerary boats near the burial tomb so that the Pharoah in his afterlife could sail in his domain along the Nile, or in his incarnation as the Sun God, travel on his daily journey across the sky. Several empty ones were found scattered about but it was not until 1954, forty six centuries after Cheops built his Pyramid, that a complete boat was uncovered. The discovery was made by archaeologist Kamal el Mallakh and Inspector Zaki Nur. They found an air and watertight rectangular pit 31m long and 6m deep on the southern side of the Great Pyramid covered by 41 limestone blocks each weighing 16 tons. 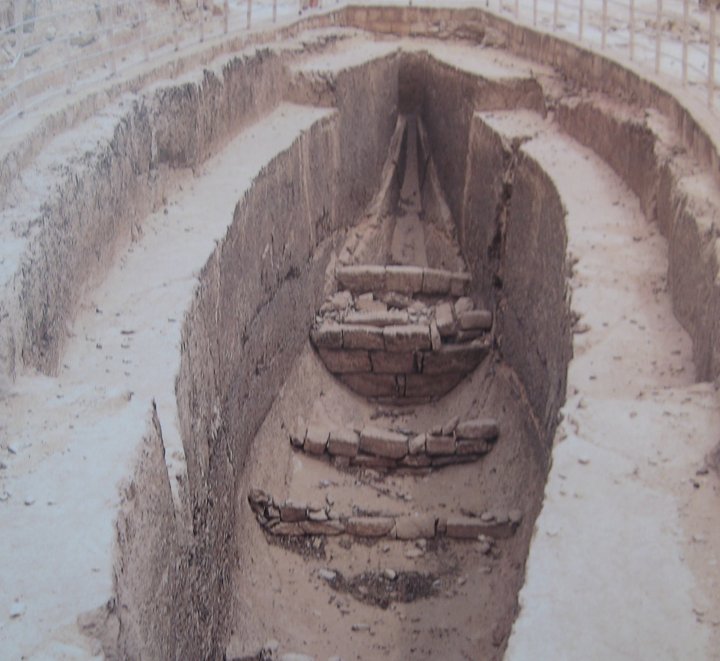 Inside the bit was a dismantled cedar wood boat, which when finally assembled was 13m longer than the pit it was found in. The boat was stored in 13 layers of planks and comprised 1224 separate pieces of wood, the longest being 21m and the shortest 10cm. The original builders had marked the main parts of the boat in hieratic script (bow, stern, bridge, etc) but even so all the pieces had to be laboriously recorded and still it took 14 years to reassemble the boat. 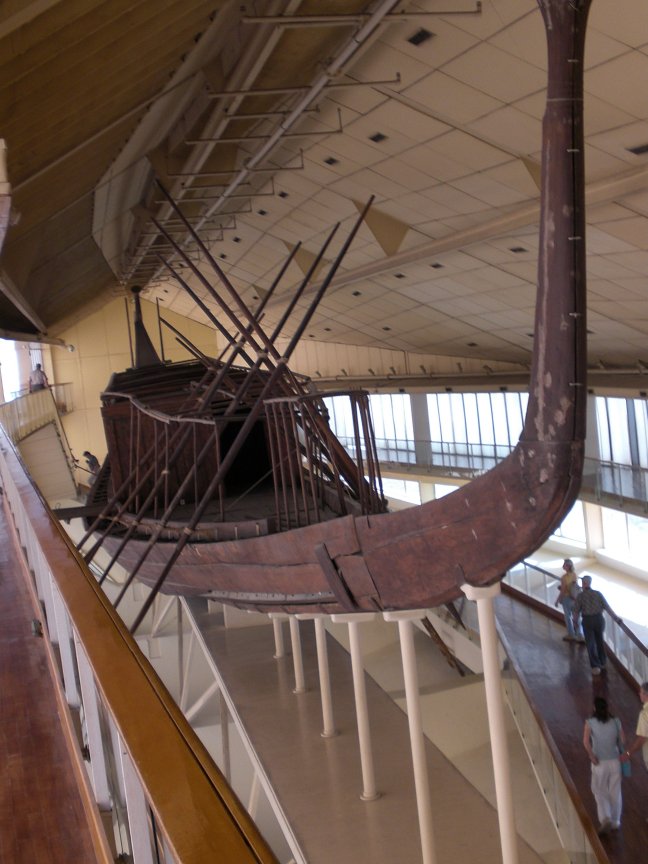 It was worth the wait because what they got was a 43.5m long boat, flat bottomed, with a massive flared hull. The planks were ‘sewn’ together with a system of ropes looped through holes that met on the inside and on the deck was a small forward cabin with the royal cabin amidships. Propulsion was by ten oars and the boat was steered by means of two large oar rudders. The soaring bow and stern posts were in the form of papyrus bud finial which gave the whole boat its regal air. It also looks curiously familiar to anyone who followed Thor Heyerdahls’ epic adventure in Ra, as this cedar wood boat is a wooden copy of a papyrus reed boat dating back to the pre-dynastic period. 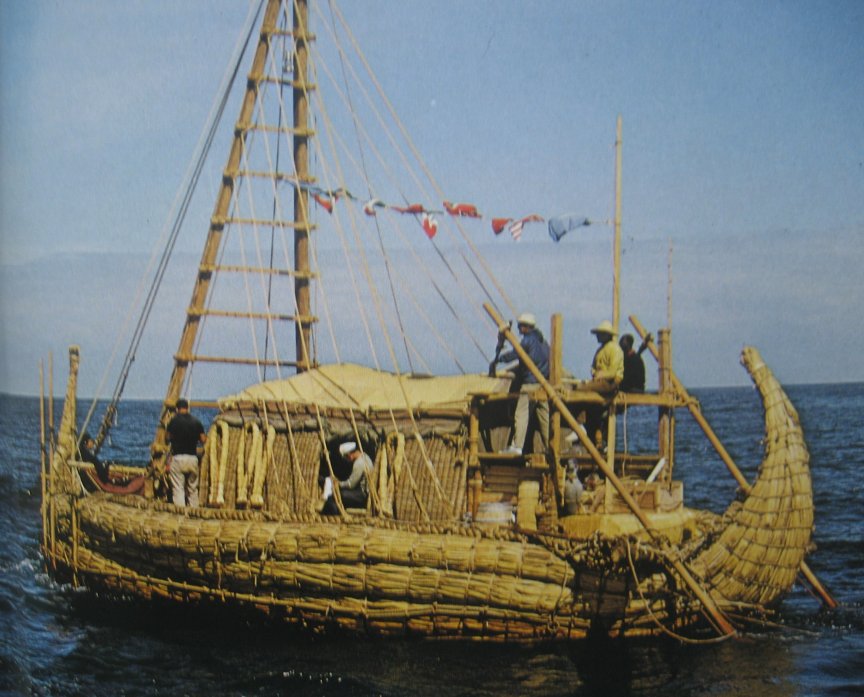 Conserving the boat caused huge problems, but the museum to display it caused even more. It’s a huge glass and concrete structure slap bang in front of the great Pyramid and right from the start nobody liked it, and it failed to do its job properly. The huge double glazing kept the direct sunshine out, but the special sun screen created a hot house effect which raised the temperature to nearly 40c. 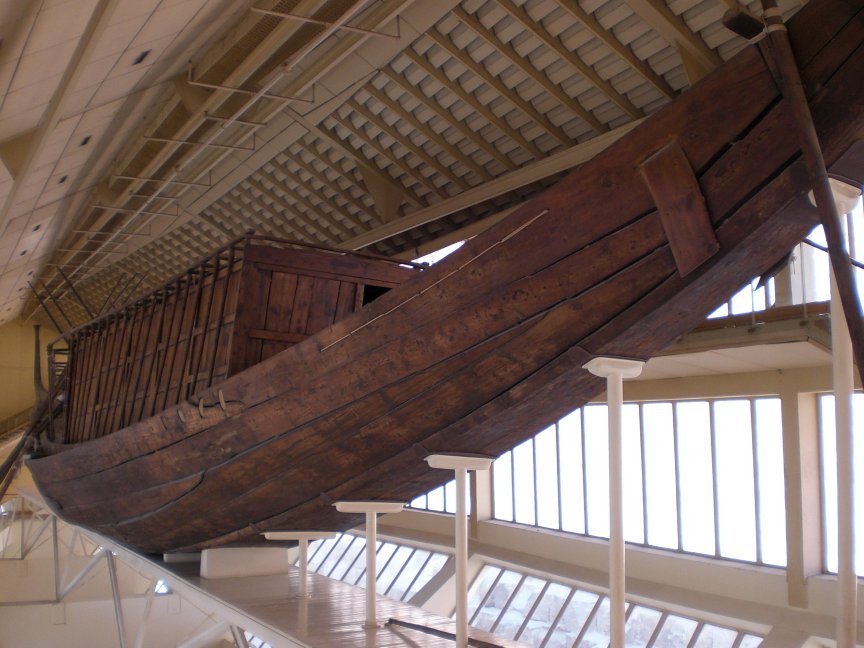 It was dangerous for the boat, the heat caused it to expand and contract,and the tourists hated the heat and humidity. Fans were installed but did little except move around the turbid air. Air conditioning was installed but was either to hot or cold and the way the visitors were controlled caused some damage to the boat. The wrangling in committee went on for years and although things are much improved (I saw it 2009) experts are still not happy and so a digital map of the boat is being made to try and keep tabs on its deterioration. 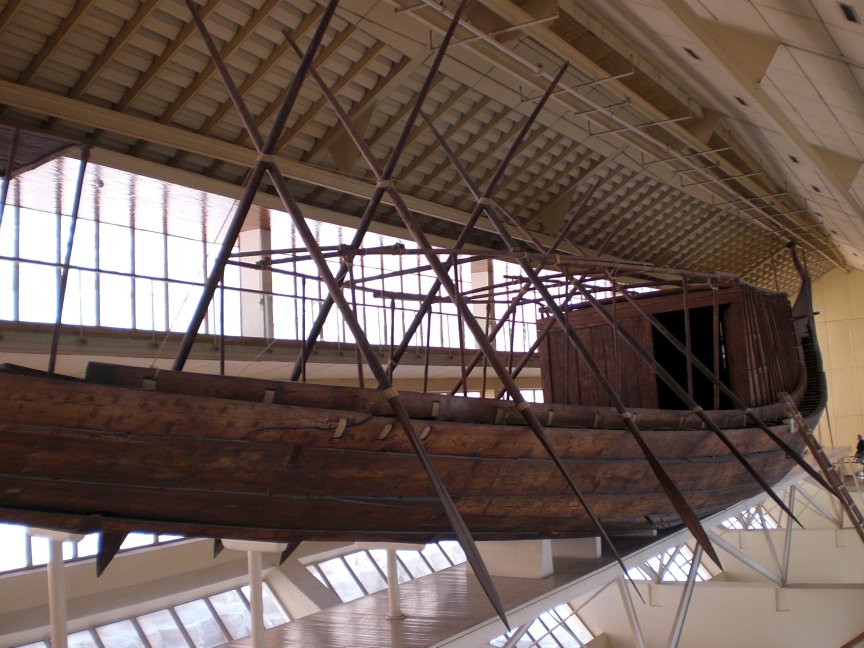 Inside you certainly get a good view of the boat from all angles as the galleries are built on different levels. There is plenty to see on the discovery and how the boat was put together and conserved, they also have the pit where the boat was found. The boat is orientated as it was found with its bow pointing to the west to follow the sun god Ra on his daytime journey westward across the skies, and during his night time journey beneath the earth. Analysis of the water content of the wood suggests that the boat might well have been used to transport Cheop’s body on his funeral procession down the Nile from Memphis to Giza ( in those days the course of the Nile was much closer to the Pyramids) 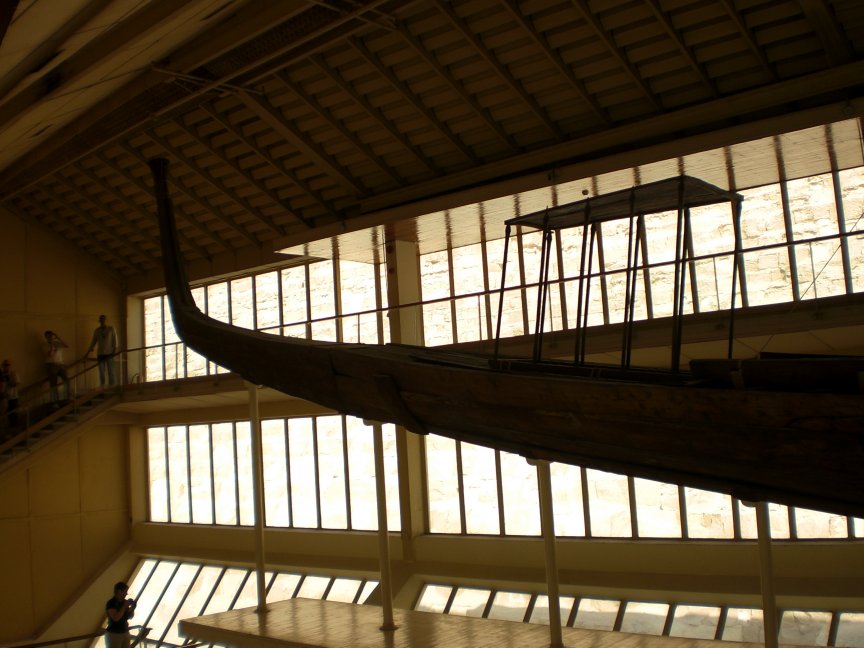 The bow showing a smaller cabin, possibly for the Capt. Photo Joyce Mitchell.

Whist you can’t really call this marine archaeology, I have included this boat because it is the oldest boat ever found, some 4500 years old. Its story, plus its proximity to the last great wonder of the ancient world, The Great Pyramids makes it a fascinating artefact to see, and brings all those Wilbur Smith novels to dramatic life. 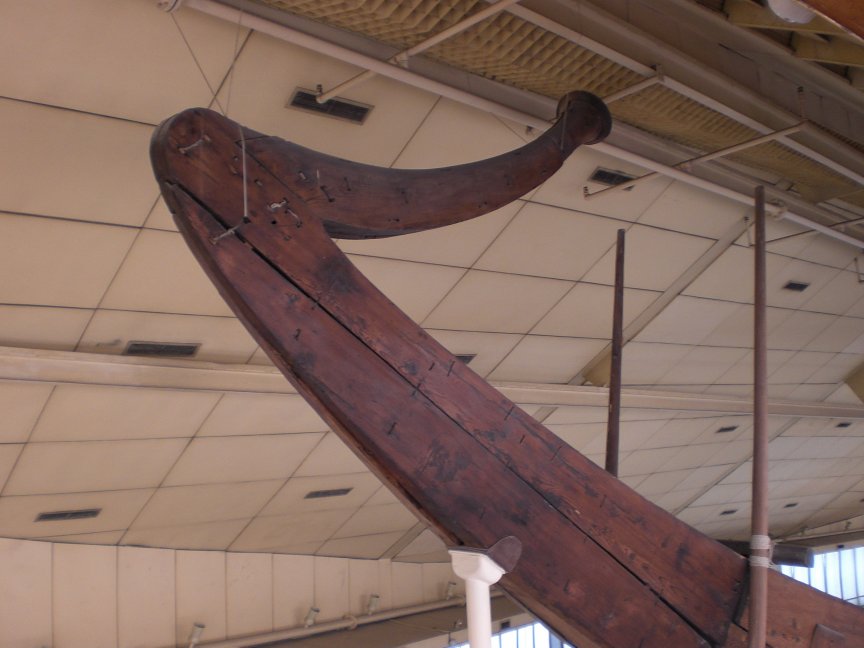 The stern is like a papyrus stalk. Photo Joyce Mitchell.