On Monday 15 January, 1979, the freezer trawler Nordzee limped into Plymouth Sound with her skipper yelling over the radio in bad English and excitable French, that she was full of water and in imminent danger of sinking. A Plymouth Pilot’s boat set off to have a look, and found the 160 foot Noordzee already half submerged in Jennycliffe Bay. The crew of fourteen were already in the process of abandoning the vessel, when she heeled over to starboard and sank, messily scattering barrels and odd pieces of loose gear all over the Bay. Quite why the Noordzee sank has remained a bit of a mystery. Her holds were almost full of fish, which she was intending to freeze down before she returned to her home port of Scheveningen in Holland. 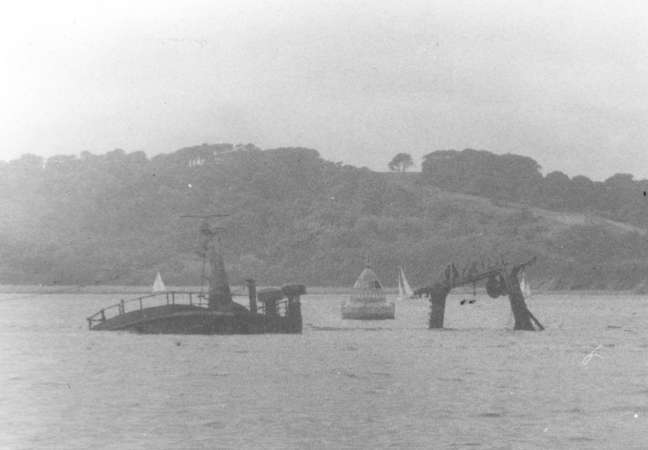 The Noodze resting on the bottom.

The general assumption was that she had sprung a leak, and then her cargo had shifted in such a way as to cause her to capsize. However, detailed underwater surveys by the HM Dockyard diving team, found no evidence of any damage that would cause the Noordzee to take in any water, let alone sink, and since the sea was flat calm at the arne, a capsize seemed rather a difficult feat to accomplish. Still capsize she had, and the Plymouth Port authorities wanted her removed before she released hundreds of tons of rotting fish, and thousands of gallons of fuel oil into the Sound. At the time there seemed to be rather a glut of freezer trawlers, and the Noordzee’s owners did not seem very keen to salvage the vessel. Maybe it was worth more on the bottom? Anyway the Port authorities were adamant about its removal, and after a couple of months of legal argument tenders for the salvage were arranged and the contract awarded to the local firm of Plymouth Ocean Projects, situated at Fort Bovisand. 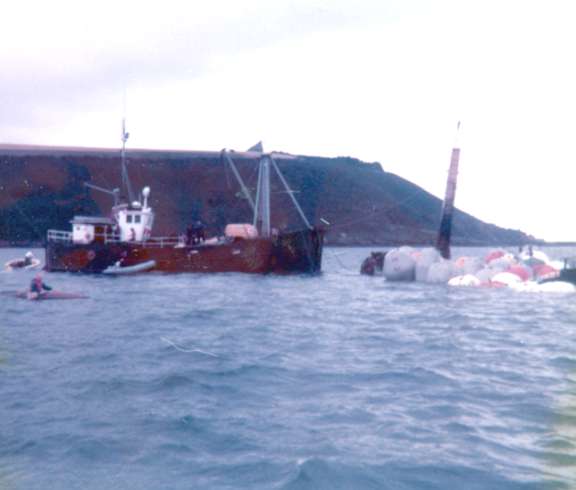 The Ocean Project plan was to get the Noordzee upright on the seabed, and then carry out a tidal lift to get the vessel into the much shallower water at the base of Jennycliffe. Here the Nordzee could be pumped out and should have floated quite happily under her own buoyancy. Unfortunately the team was dogged by bad weather and bad luck, and although they managed to get the vessel upright, they just couldn’t get her into shallower water. After three months their contract expired, and since it had been awarded on the usual terms of no cure no pay, the Ocean Project team received nothing for all their hard work, and in the end a new contract was put out for tender. Two months went by before a Kent firm, called Eurosalve took up the challenge. After careful survey Eurosalve decided to abandon a tidal lift in favour of just lifting the whole vessel off the seabed, using buoyancy bags, and pumping her out when she hit the surface. In order to do this the team removed all unnecessary gear from the top deck, unbolted all the deck handrails and stanchions, and fitted brackets and plates to act as lifting eyes for the buoyancy bags. 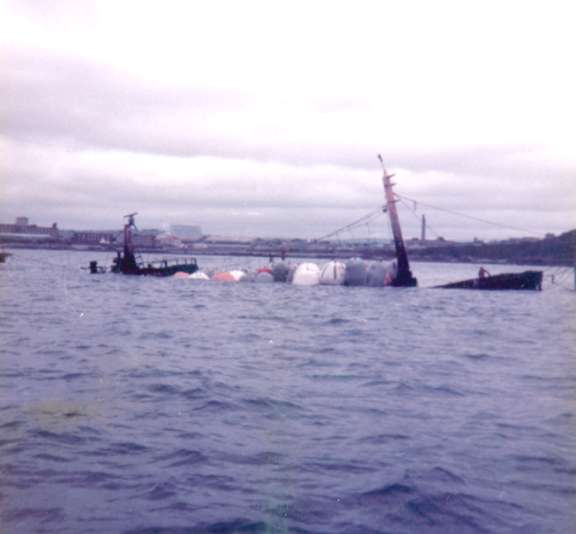 More lifting points were provided by cutting over thirty holes into the Noordzee’s stem, into which were put strongbacks and chains. In order to provide some internal buoyancy right from the start, the forepeak door was welded up and air pumped into the bows to provide about 120 tons of internal buoyancy. All this had taken Eurosalve about two weeks, and although the team were radiating quiet confidence, there was still some uncertainty about the lift since nobody in the UK had ever lifted such a large vessel just by using lifting bags. For the next week the team were very busy connecting over eighty lifting bags to the strong points. Twelve of these were ten ton lifting bags, whilst nearly all the others had a five ton lift capacity. Soon all was ready, and one Saturday morning the salvage team started to inflate the bags. For a long time nothing seemed to happen. More and more bags appeared, straining on the surface, when suddenly the bows emerged looking quite black and shiny. More bags were quickly inflated at the stem, and almost with a rush the Noordzee was on the surface surrounded by a strong odour of rotting fish. 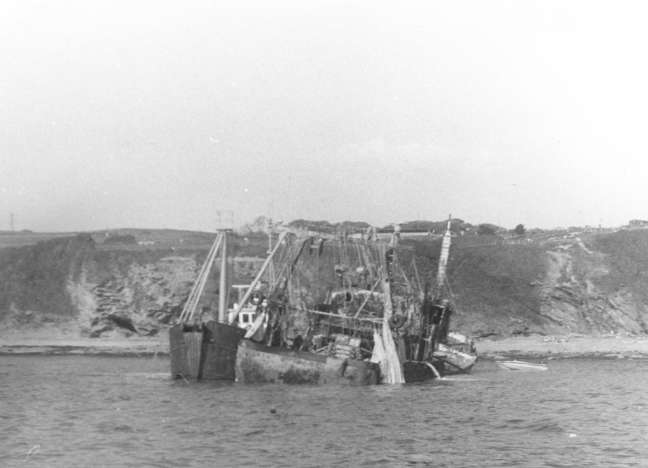 Finally on the surface.

There was no time for jubilation. Pumps were switched on, and soon the Noordzee started to ride higher in the water as hundreds of tons of water were pumped out of her. She showed no sign of returning to her watery grave, and soon she was safely afloat. Eurosalve had done it. Soon after, the Noordzee was towed to Millbay docks to have her rotting fish removed, and was then left to await another owner. After a couple of months she was bought by a gentleman who wished to turn her into a cruise trawler. Apparently he had two, other vessels in the Caribbean, and they had become very popular with the tourists. 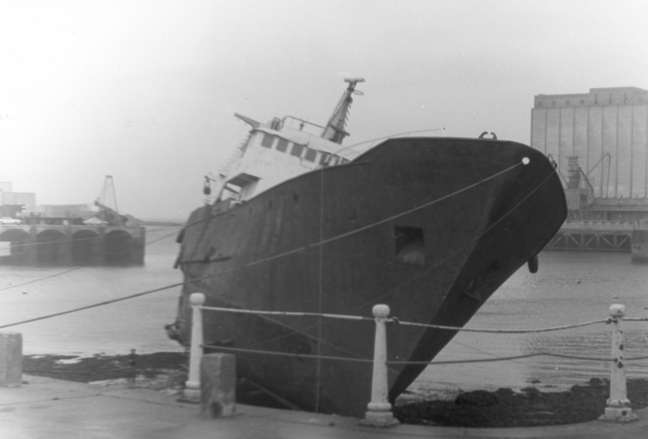 In the next year or so a lot of work was done on the Noordzee, and her future seemed secure. There was one minor mishap in 1981, when she managed to run aground whilst being moved to a new berth in the outer tidal basin. However there was no serious damage done, and she was safely refloated on the next high tide. Things, however were not going so well for her new owner. Soon after the Noordzee’s stranding he collapsed and died of a heart attack. His company did not seem to want the Noordzee, and she was ordered to be sold at auction. In the event, nobody wanted her as a ship, and she was sold for about four thousand pounds to a Plymouth scrap dealer. 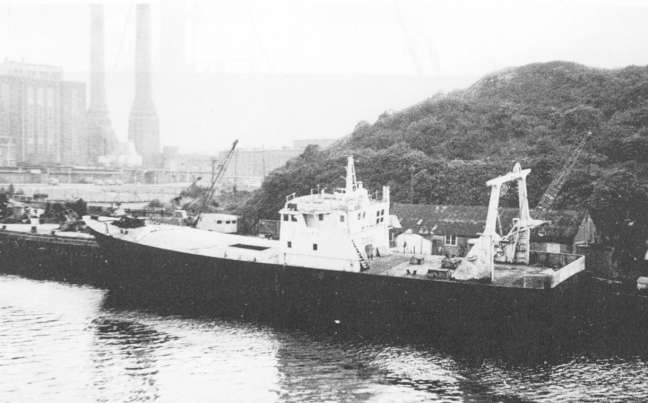