The SS. Great Britain, built in 1843 at the Great Western Docks in Bristol was a truly innovative vessel. Designed by the great I.K. Brunel, she was the worlds first iron hulled, steam powered, propeller driven ocean going ship, and was designed to serve the ever expanding trans-Atlantic luxury passenger trade. Originally conceived as a paddle steamer, the ships builders soon realized the enormous advantages of the new technology of screw propulsion and had her engines converted to power a sixteen foot iron propeller. 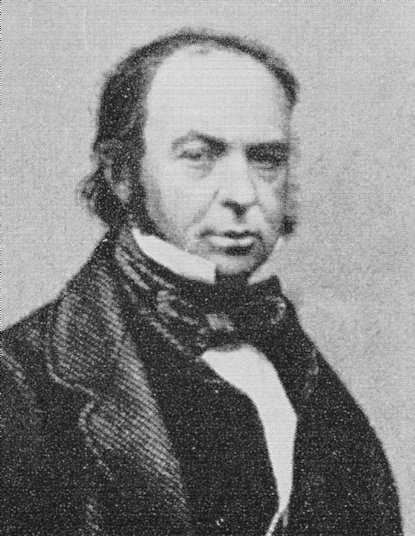 When the SS. Great Britain was launched she was the largest ship in the world weighing in at a colossal 1930 tons. Her maiden voyage to New York on 26 July 1845 was completed in an astounding fourteen days and showed her ability to do safe and speedy passages. Although she could take up to 252 passengers served by 130 crew, her voyages did not generate much money for her owners as they had miscalculated the demand for their services. When the Great Britain ran aground at Dundrum Bay in Northern Ireland in 1846, her engines were ruined and the expense of re-floating her so drained the finances of her owners that she was sold to Gibbs Bright and Company, who used her to great effect on the Australian run. 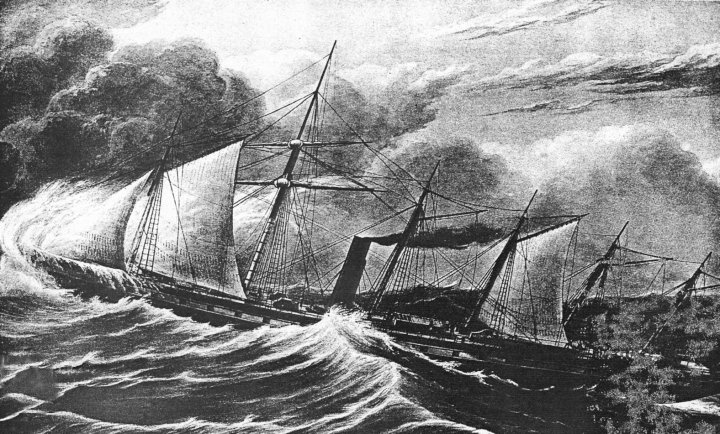 Gold had been recently discovered over there and so the Great Britain was remodelled as a fast luxury emigrant carrier and her accommodation was rebuilt to accommodate 750 passengers. Between 1855 and 1856 the British Government chartered the ship to transport troops to and from the Crimea War. Over 44000 troops were carried during the course of the conflict. Later she was again chartered to carry troops, this time to quell the Indian Mutiny. In 1861 she carried the very first English cricket team to tour Australia. The tour was a great success with England playing twelve games of which she won six, drew four and only lost two. 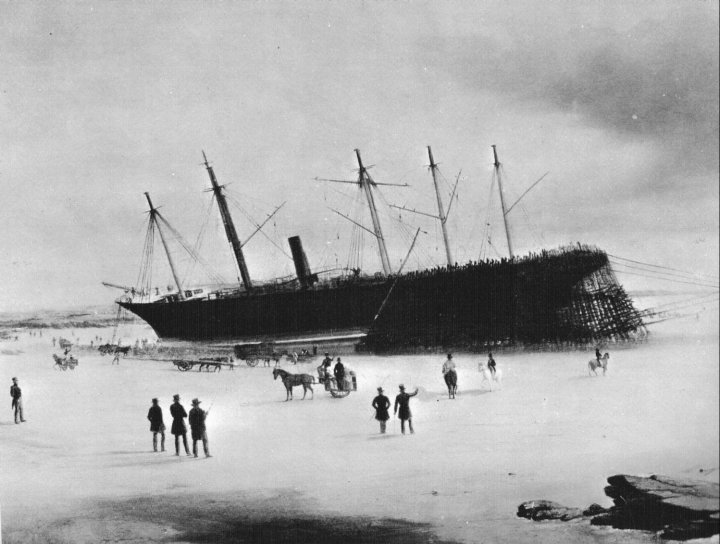 Aground in Dundrum Bay

By the late 1870’s the SS. Great Britain was starting to show her age, and her owners could no longer keep their full registration as a passenger vessel. However because she had a sleek hull and low profile she could easily be converted to a three masted ‘clipper’ ship. With her engines removed and her spar deck torn off she was unrecognisable as the ship that had been launched all those years ago in 1843. Still she was still useful and could earn money for her owners and this she did by transporting coal from Wales to San Francisco. On her third trip she ran into trouble off Cape Horn and ran for the safety of Port Stanley in the Falkland Islands. Unfortunately for the Great Britain, the cost of repairing her was not deemed economic and so she was sold off for use as a coal and wool storage hulk and remained in Port Stanley. 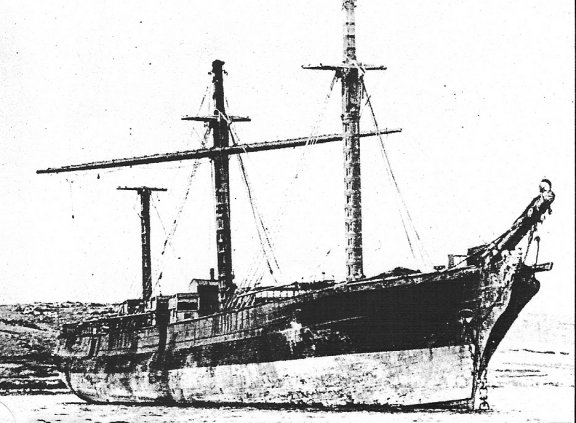 Abandoned in the Falkland Islands.

Here she remained all through the First World War. Coal from her holds helped refuel H.M.S. Invincible and Inflexible before the decisive Battle of the Falklands in December 1914 which saw the destruction of the German battle cruisers Scharnhorst and Gneisenau. By 1938 the Great Britain’s hull was no longer watertight and she was towed a short distance from Port Stanley to Sparrow Cove where holes were cut in her hull and she was abandoned.

But the story doesn’t end there. People always loved this ship and recognised her historic significance. Unsuccessful salvage attempts were mounted in the 1930’s and 1960’s and during the Second World War bits of her were raffled off to raise money to build Spitfires. 1967 saw the start of what in the end turned out to be the successful attempt, when a naval architect called Dr. Ewan Corlett wrote to the Times about his ambition to bring the great ship back to Bristol. After many false starts plans were laid and surveys done but money remained the biggest problem. In the end a millionaire philanthropist called Jack Hayward (known popularly as ‘Union Jack’) said that ‘he would see the ship home’, and so finally things started to move. 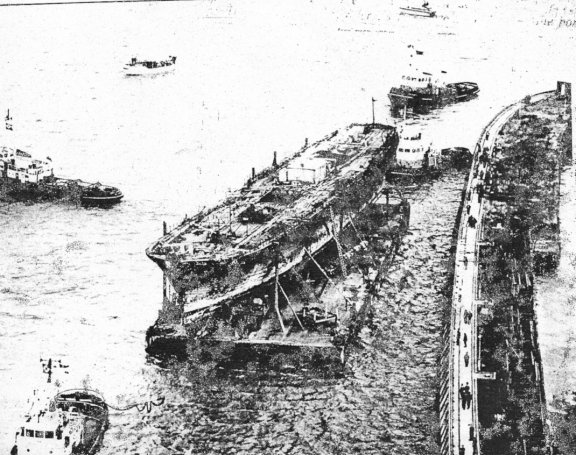 Being towed on the barge.

Unfortunately when the ship was fully surveyed prior to being towed home it was found that the hull was not strong enough to survive the journey. What to do? The salvors, Risdon Beasley came up with the idea of a submersible pontoon that could be placed under the ships hull then pumped out to lift the ship clear of the water. The pontoon would then effectively become a barge with the Great Britain stuck fast on top. On April 7 1970, most of the population of the Falkland Islands turned out to see the old ship start her epic voyage. At first the winds were savage and the sea exceedingly rough, but by the time the ship reached Montivideo all was calm. 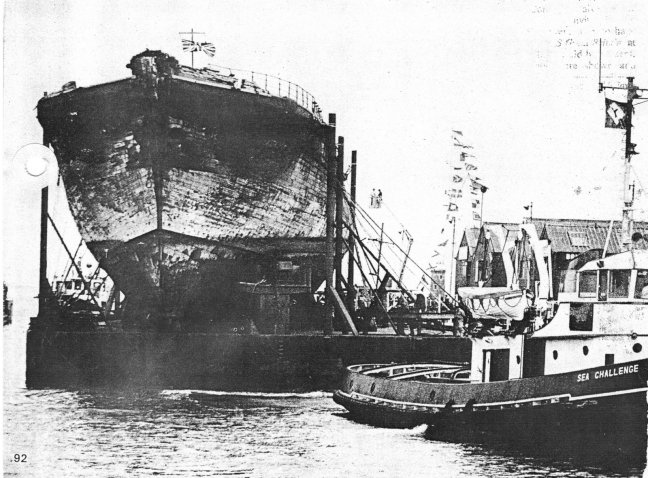 As the tug Varius, commanded by Capt. Herzog, towed the barge with her precious cargo at a sedate five knots past Rio and onwards to Reciefe in Brazil the Atlantic Ocean beckoned. The weather remained kind to the Great Britain on the crossing and on June 18th she rounded Cape Finistere and was finally back in her home waters. On July 19th she triumphantly cruised up the Avon and slid into the dock where 127 years to the day, she was first launched by Prince Albert, Queen Victoria’s Consort.

In 1970,the BBC’s Chronicle programme, did a great report on how the ship was saved.Just click the link below to see it.