I must confess that I have a personal attachment to H.M.S. Belfast, as in 1964 I was doing my seaman ship training at H.M.S. Bellerophen in Portsmouth, where the Belfast was used as an accommodation ship. I slung my hammock in the rear mess deck and so got my introduction to life aboard ship. H.M.S.Belfast was a heavily armed light cruiser of the Southamton class. Originally she displaced 10,000 tons, but later, in 1942, after a slight mishap with a mine she was ‘bulged’ amidships and so her displacement increased to 11,500 tons. 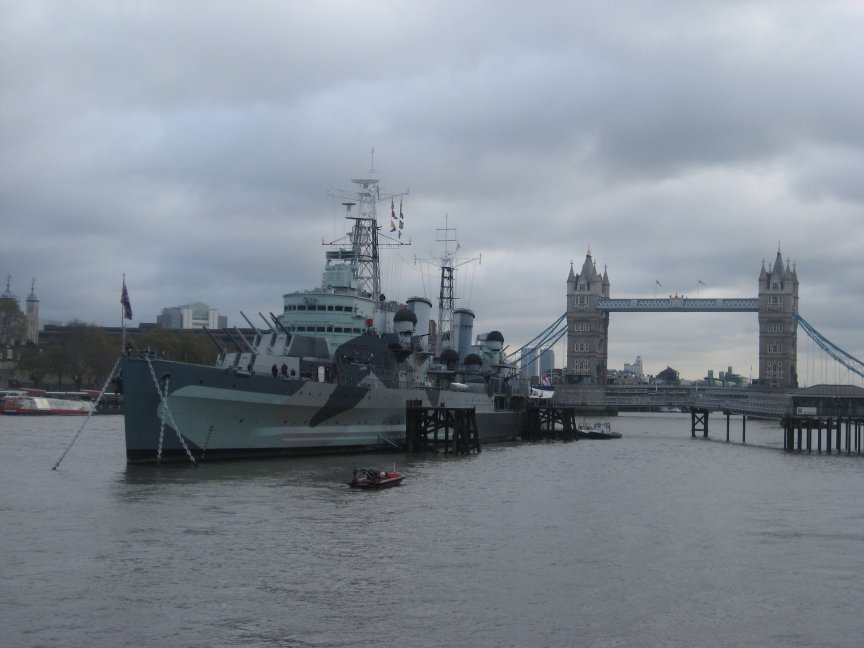 Originally she was to have had sixteen, six inch guns, in quadruple turrets, which was the maximum allowed under the terms of the ‘Washington Treaty’. Unfortunately it was found to be impossible to manufacture an effective quadruple gun mounting due to ballistic problems with the ammunition, so they reverted to triple mountings that were already in use on other Southampton cruisers. The extra space was later filled up with anti aircraft guns, and for a short time she had a small seaplane to help with spotting the enemy. Radar later made this obsolete 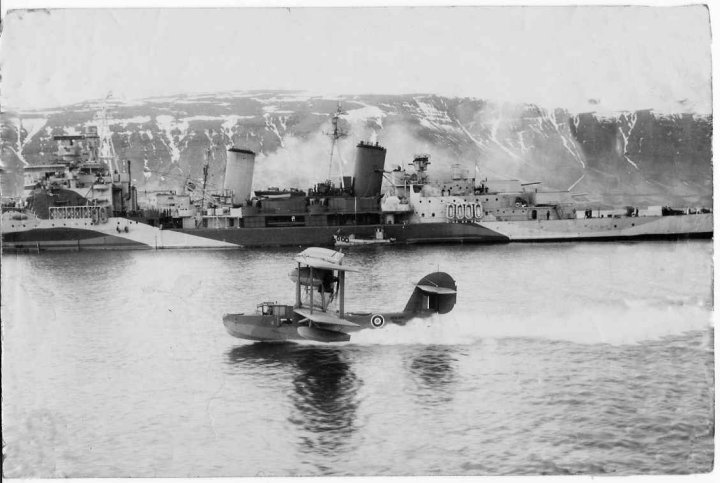 Belfast was built, appropriately at the great Belfast shipyard of Harland and Wolf (home to the Titanic), and was launched on 17 march 1938. Ironically this great warship was launched by Anne Chamberlain, the wife of The Prime Minister Neville, famous for his speech about ‘peace in our time’. The following year War broke out and Belfast became part of the 18th Cruiser Squadron operating from the Royal Navy’s great anchorage at Scapa Flow in the Orkneys. 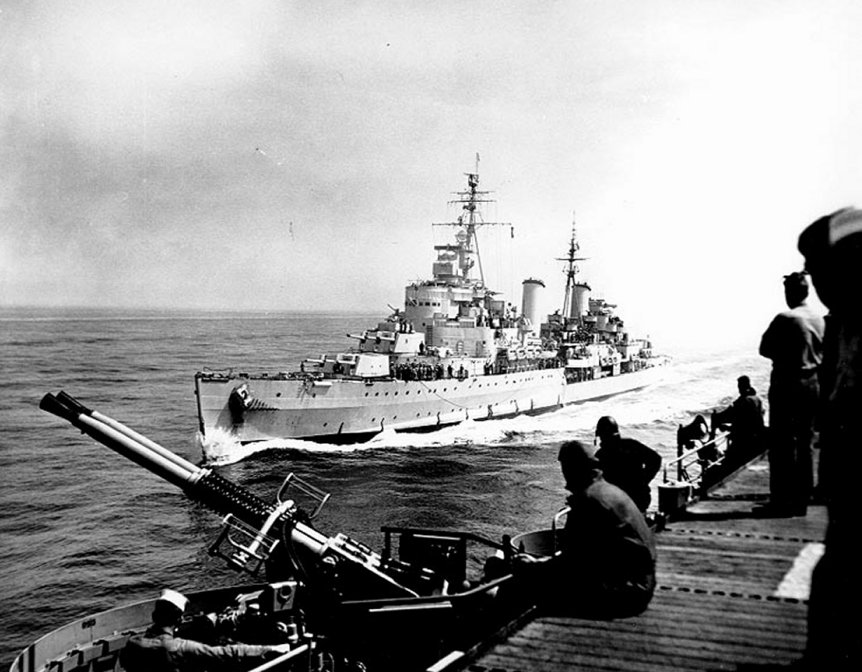 The Royal Navy was trying to impose a blockade on Germany to stop it receiving’ war materials’ and constantly patrolled the Northern waters. An early success came when the Belfast intercepted the German liner S.S. Cape Norte, disguised as a neutral ship. She was full of armed forces reservists trying to get back to Germany to rejoin their units. Shortly after this success, came disaster, when Belfast hit a mine off the Firth of Forth. Mercifully casualties were slight but the ship broke her back and was so severely damaged that she seemed destined for the scrap heap. However naval architects were convinced that she could be repaired but it took nearly three years before she was ready to rejoin the Fleet. During her repairs she had been completely refitted with all the latest gear, including radar and a much improved fire control system and by the time she returned to active duty she was the most powerful cruiser in the Fleet. 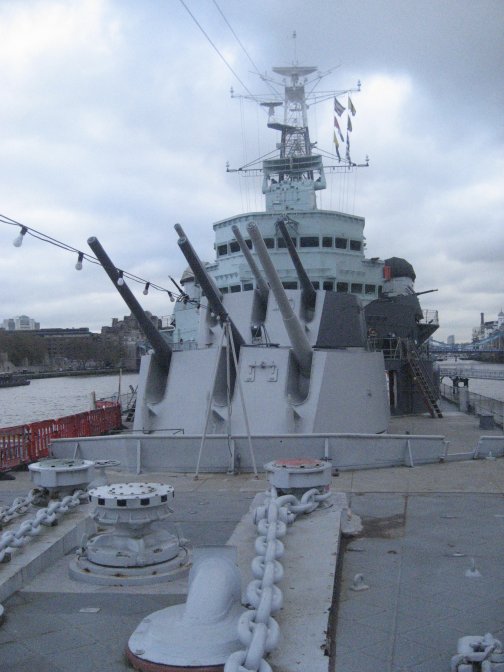 In 1943 she spent most of her time in the icy waters of the Artic as part of the 10th Cruiser Squadron, protecting convoys taking vital supplies to Russia. At the end of that year, on Christmas Day 1943 the German battleship Scharnhorst accompanied by her escort of five destroyers, swept out into the north Cape to attack the convoys rounding the northern tip of Norway. Unknown to her captain, British Intelligence were deciphering all her signals which enabled the Royal navy to lay a trap for her. Whilst Belfast along with the cruisers Norfolk and Sheffield screened the convoys and thereby kept Scharnhorst in action, Admiral Frazer, in the battleship Duke of York, accompanied by the cruisers Jamaica and four destroyers tried to cut her off from the South. 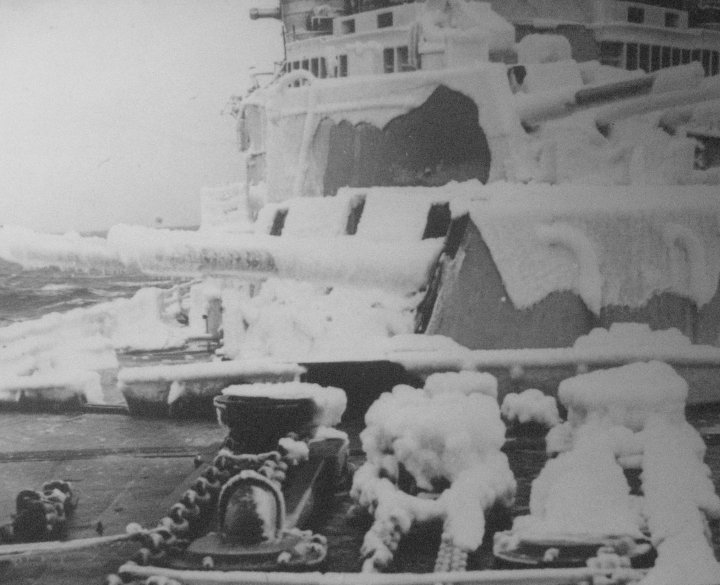 Meanwhile, due to the extreme weather, Scharnhorst had sent her destroyers back to base and came across the British cruisers. Norfolk struck first with a direct hit from one of her eight inch shells causing Scharnhorst to retreat with Belfast and Sheffield in hot pursuit driving the enemy battleship towards Admiral Frazer’s Duke of York with her mighty fourteen inch guns. As soon as radar contact was established the Duke of York opened fire and hit the Scharnhorst with her first salvo. Severely damaged the Scharnhorst tried to flee but could not shake off the British vessels. Now hit by three torpedoes, the Scharnhorst was dead in the water and as the smoke cleared away Belfast and Jamaica were ordered to finish her. As the Belfast fired the Scharnhorst blew up and quickly sank into the icy waters. Of her crew of 1,963 men only 36 were saved. 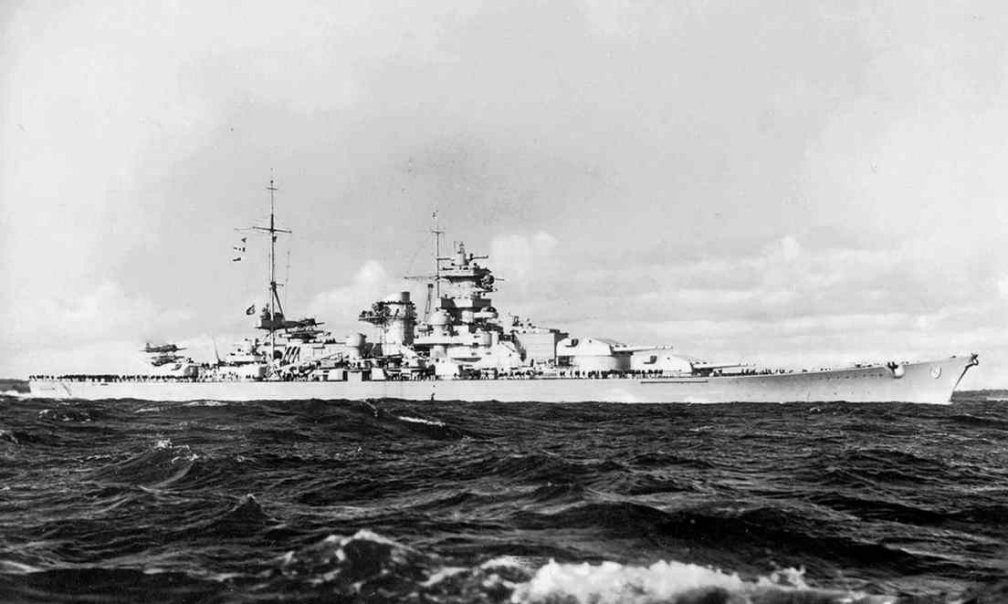 In March 1944, Belfast in company with a powerful force of Battleships and Carriers took part in ‘Operation Tungsten’. Their objective was the destruction of the Tirpitz, Germany’s last surviving battleship, which was holed up in Altenfjord in Northern Norway. Approaching to within 120 miles of the coast they launched a huge airstrike hitting the Tirpitz with 15 bombs. The battleship survived but was so badly damaged that it could not put to sea for many months. She was finally destroyed by heavy bombers from 617 Squadron R.A.F. in November 1944. On June 6th 1944 the D-Day landings started, with Belfast in the thick of the action as part of a Naval bombardment in support of the Canadians on Gold and Juno beaches. Over the course of the next five weeks Belfast fired thousands of rounds, and by July 1945 the Allies had moved well in land, out of the range of the Belfast. 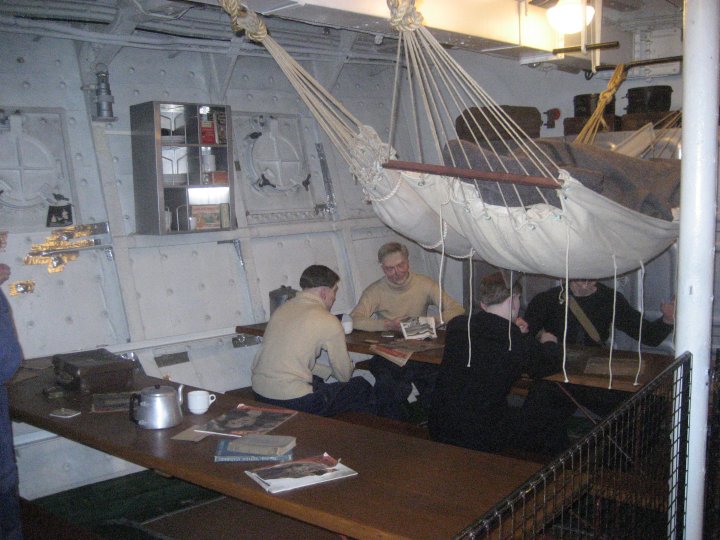 My introduction to life aboard ship-broadside messing.

By the time she got there the Atomic Bomb had been dropped on Hiroshima and Nagasaki and flattened Japan into unconditional surrender. Belfast contented herself with peacekeeping operation and by helping to evacuate the survivors from the prisoner of war camps. By the end of 1947 Belfast returned to England for another refit and when that was finished she went back to the far east as the Flag Ship of the 5th Cruiser Squadron. China was now in great turmoil with the forces of Mao Zedong (he of the little Red Book) in ascendance over the nationalist government. Around this time the Yangtze Incident took place with H.M.S. Amethyst being disabled and blockaded by the Chinese Communists with heavy loss of life. She eventually escaped to win through back to a hero’s welcome in England, but not before she and H.M.S. Belfast had done another job. 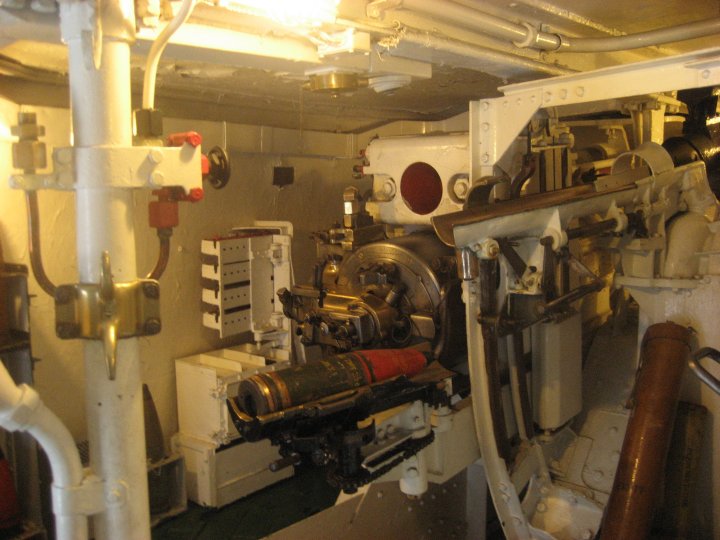 Inside the gun turret.

By the start of 1950 the ancient kingdom of Korea was split between a hard line Communist regime in the North and a more moderate government supported by the United States of America in the South. The stage was set for another world war but some sort of reason prevailed, even though there was fierce fighting when China invaded, forcing the UN troops to retreat and by the Summer of 1951 both sides had settled down to a war of attrition along the line of the 38th Parallel. After two years of negotiations a Cease fire brought the fighting to an end in July 1953. Even so no formal peace treaty has ever been signed. H.M.S. Belfast was one of the first British ships to go into action bombarding in support of the retreating South Korean and American troops. On the night of 15 July 1952 Belfast teamed up with Amethyst to help capture the strategically important island of Changni-Do. After spending 404 days on active patrol during the Korean War, Belfast sailed for home, where she had another refit and extensive modernisation. Although the day of the big gun was passing, the Navy still needed ‘big’ ships, to show the flag around the world. However as the old Empire disappeared, the need for a large peacetime Navy dwindled. After a last exercise in the Mediterranean in 1963 Belfast was paid off into the Reserve and classified as a harbour accommodation ship. 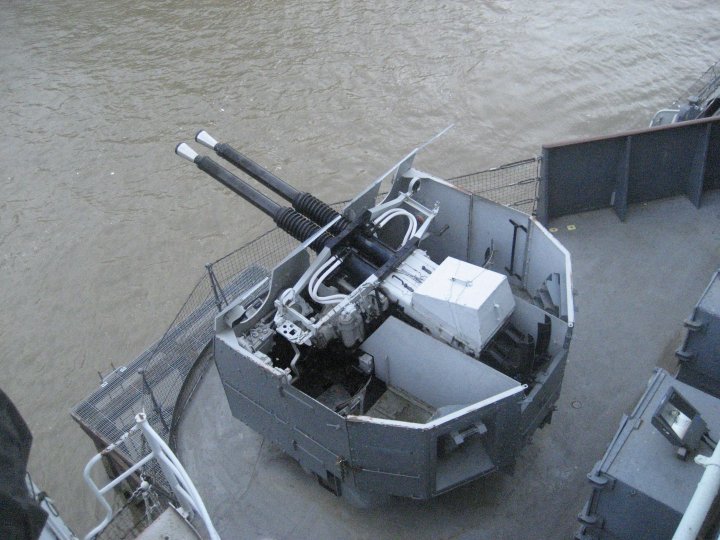 Thankfully Belfast was to be spared the indignity of the breakers yard, because as early as 1967 the Imperial War Museum had investigated the possibility of preserving the ship. As ever the Government of the day refused to help, so the Museum encouraged an independent trust, led by one of the ship’s ex captains, Rear Admiral Sir Morgan-Giles. Eventually she was brought in triumph to London and opened to visitors on Trafalgar day 21 October 1971. So what’s it like to visit? Well much to my surprise I loved it. I often find that this sort of exhibit is deadly dull, it’s as if all the life has been sucked out of it, but the Belfast is a revelation in how to do it. The ship itself has been beautifully preserved often with ex crew members helping out and the love shows. For me it was like stepping back in time and all my memories came flooding back. 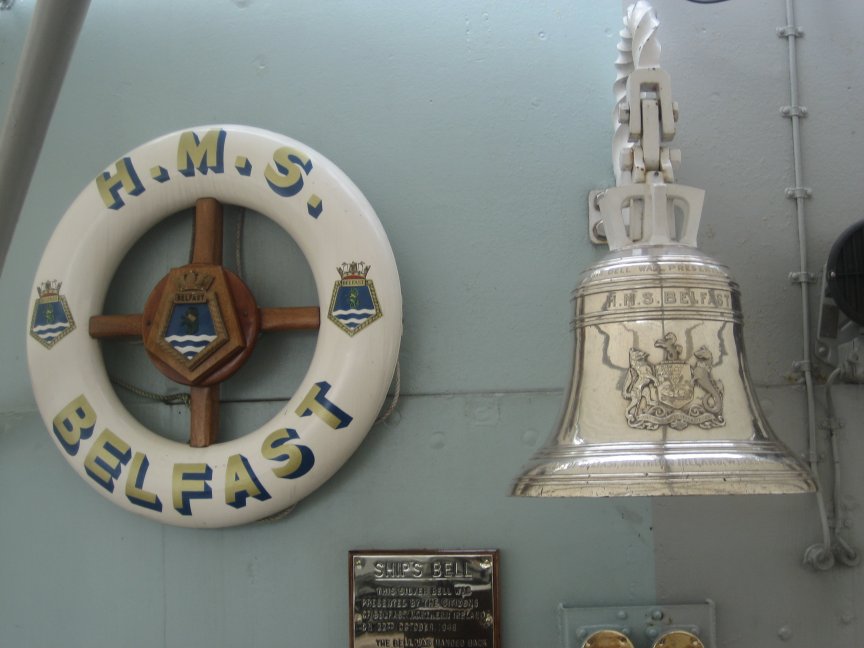 We spent over two hours there and still didn’t see it all because my wife bulked at climbing down into the engine room, which I must admit looked quite a long way down, so I saved it for another day. In the various parts of the ship, like the galley and hospital, they have very realistic dummies illustrating what’s going on, and quite often you see visitors asking them a question before realising their mistake. In various compartments they have more on the history of the ship with video and photos. Up on deck you can go into the turrets and look at all the gun machinery. There is plenty to see and it’s all been done wonderfully. The Belfast is moored near Tower bridge next to a galleria with lots of restaurants, pubs and coffee shops. You can also take a walk along the Thames on the new (to me) riverside walkways. It’s a great day out, and you will want to go back, because they have caught the essence of this great ship, she is still alive, and that is a great achievement.