Of the 2700 Liberty Ships built between 1941 and 1944, this is the only one left in its original and full operating condition.It can be seen at its berth in San Francisco, and even does trips around the Bay at certain times.I have reproduced this info from its own pamphlet.All photo’s were taken by Steve Carpenter of Sound Diving 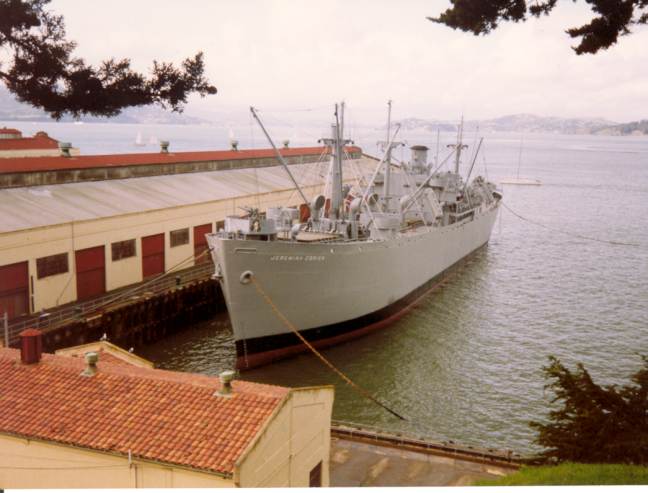 The Jeremiah O’Brian at her berth in San Francisco.

Like most ships at the time, the 0 ‘Brien was built for a government agency known as the War Shipping Administration (WSA). The WSA then chartered the vessel to Grace Line (a commercial steamship company) to operate for them under a contract known as a General Agency Agreement. This took place in June of 1943. During the period July 1943 to October 1944, the Jeremiah 0 ‘Brien made four voyages between the United States and Great Britain. On these trips the ship traveled as part of a convoy. Convoys were found to be an effective deterrent to submarine attack as far back as World War I. In World War II they were no less effective. On her fourth voyage the O’Brien was diverted into a shuttle run between England and the newly taken Omaha and Utah beachheads at Normandy. 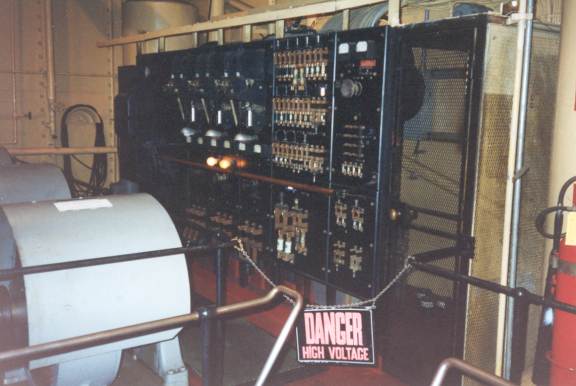 One of the eletrical boards. You used to be able to see these in the Layne before the deck collapsed.

Making her first run just four days after D-Day, the ship completed 11 such trips before returning to the States. Former crewmen report the O’Brien’s gunners engaged enemy aircraft during the Normandy campaign and that she was the possible target of at least two bomb attacks and one torpedo. 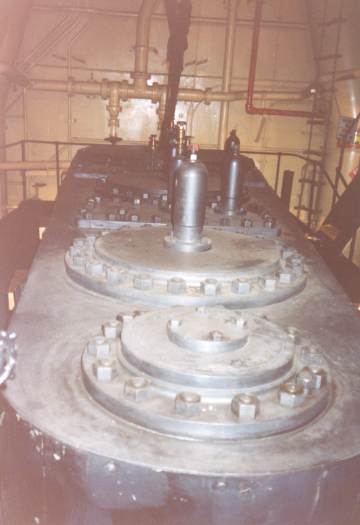 You can still see the top of this.

The O’Brien’s fifth voyage, beginning in October of 1944, went from New York through the Panama Canal to Chile and Peru, returning to New Orleans. Her sixth voyage was a quick trip to the Philippines and back, although this time she returned to San Francisco. Our gallant ship’s seventh voyage, her last, took place from July 1945 to January 1946. Sailing from San Francisco, she went to Australia, Calcutta, Shanghai, Manila and then returned to San Francisco. On the final return voyage the 0 ‘Brien carried 11 Australian war brides to the United States to join their new American husbands. 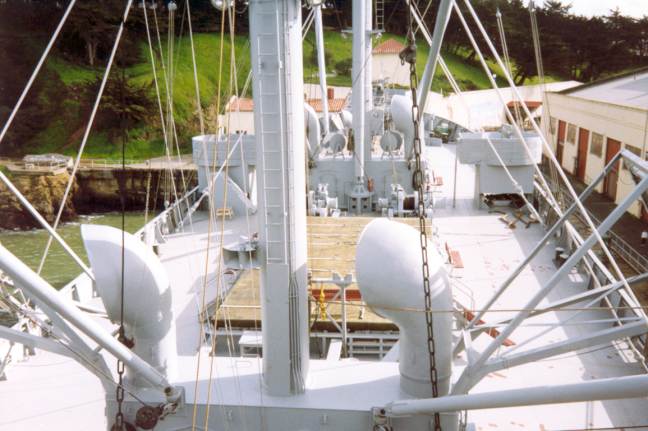 View of the deck.

While there were no passenger accommodations on board, with the war over, the war brides were able to use the vacant gunner’s quarters in the after deck house as a dormitory. The SS Jeremiah 0 ‘Brien earned six decorations for wartime service: the Merchant Marine Combat Bar, the Atlantic, the Pacific, the Mediterranean/Middle East War Zone Bars, the Philippine Liberation Medal and the Victory Medal. With the war over there were far more ships than needed for peacetime trade routes. The O’Brien, along with hundreds of her sisters was put in mothballs at Suisun Bay near San Francisco. She entered that fleet in February, 1946. It would be 33 years before she returned to service. As time passed, the ships in the reserve fleet were disposed of. Some were sold to foreign countries or went into commercial service under the American flag, others were scrapped and still others were sunk as artificial fishing reefs. 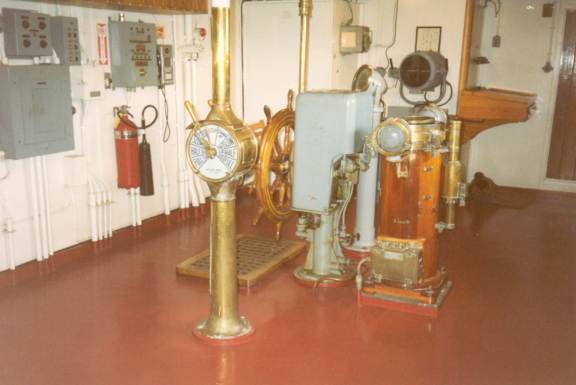 The Bridge, every wreckers dream.

In the 1960’s a plan was conceived to save a Liberty Ship for posterity. Untouched and in excellent condition, lay the SS Jeremiah O’Brien. She had the added attraction of being unaltered. In 1978, the National Liberty Ship Memorial, Inc., a California non- profit corporation was formed to restore, preserve, maintain and present to the public, an original, unaltered Liberty ship. That ship would be the Jeremiah O’Brien. Since then, an enormous amount of work, mostly by volunteers, has gone into restoring and preserving the ship. The first annual cruise was on May 21, 1980 and she has been sailing ever since. Much more needs to be done and there is an ever present need for spare parts, tools of all sorts, and various technical services. Anyone able to help in these areas is encouraged to contact the NLSM in San Francisco at 415-441-3101. Help keep our history alive! 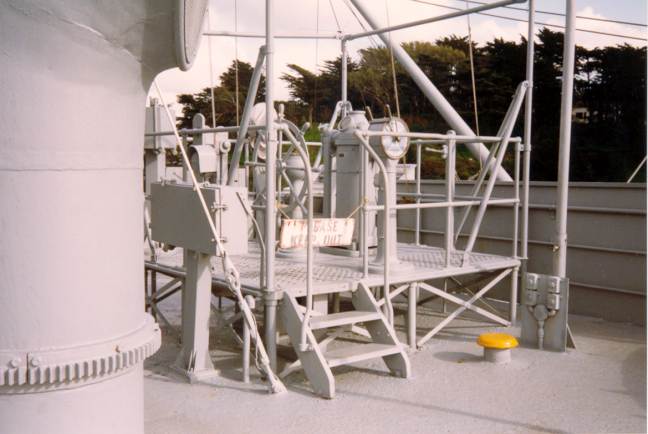 WHO WAS JEREMIAH O’BRIEN?

A Scotch-Irish lumberjack from Machias, in the “Province of Main,” Jeremiah O’Brien was the off- spring of a family that settled in that area in 1765, Ten years later trouble with the British Crown boiled over. The residents of Machias were firmly pro-Colonist. In the spring of 1775 a shipment of Machias pine was loaded into two of Captain Jones’ sloops. Normally the lumber would be sold in Boston, but unsure of the situation there, the townspeople instructed Jones to sell the lumber along the coast. Capt. Jones, anxious to move his family away from Boston and out of harm’s way, ignored the instructions and went directly there. He made a deal with the British. In exchange for the promise that he would. return to Boston with a load of lumber to build barracks for British troops, he was allowed to move his family.

Loading his sloops with badly needed supplies for Machias, Capt. Jones sailed from Boston. Admiral Graves of the British Navy wanted to be sure the Colonist kept his word. He instructed the armed schooner Margaretta to escort Jones’ ships. When the ships arrived and the townspeople heard of Jones’ deal, they became angry. In protest, they erected a Liberty Pole. When Captain Moore of the Margaretta saw it he ordered it taken down, threatening to fire on the town if his order wasn’t followed. After several town meetings, a plan was formulated to capture the British ship. One of Jones’ vessels, the Unity, was seized for the purpose and on June 12, 1776, with Jeremiah O’Brien in command went in pursuit of the Margaretta. He successfully captured it. This was the first naval battle of the Revolutionary War. 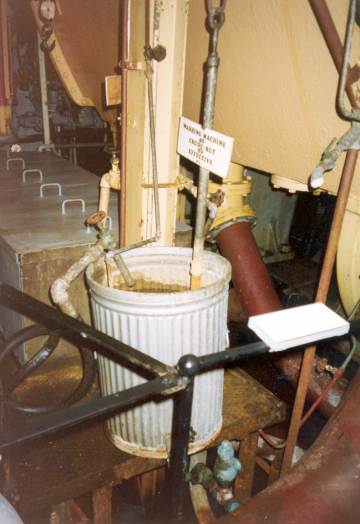 An early type of washing machine?