E boats were much more than just fast torpedo attack boats, they were in reality a scaled down warship. Heavily armed and extremely fast (in excess of 34 knots) they could cause immense damage to much larger enemy ships and escape unharmed. Called E boats by the British they should be more properly called Schenell-Boote or S boats. The last surviving seaworthy example of this class is at the moment (2008) languishing at Mashfords Yard near the Cremyll Ferry in Cornwall. 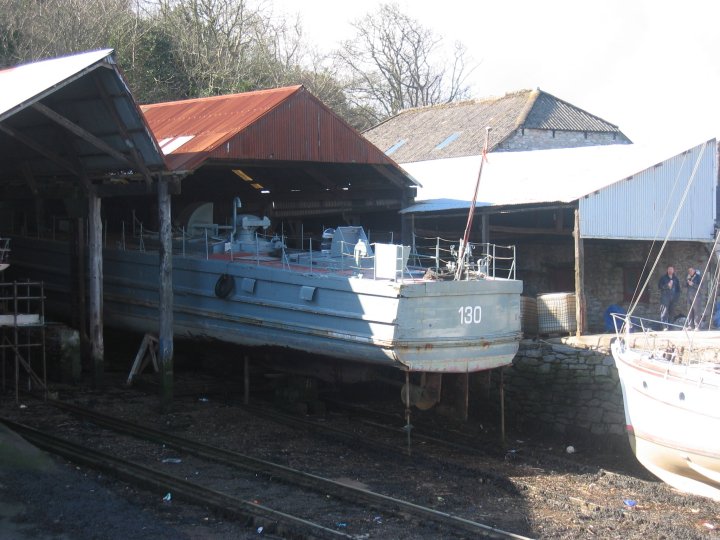 I am not all that fond of preserving things just to do it. There is a perfectly good example of an E boat at Bremerhaven, but that’s a museum piece. This boat, the S 130 however has a fantastic history that would be hard to invent, and since the object of the exercise is to restore the boat so that it can once again take to the water, then I am all for it. 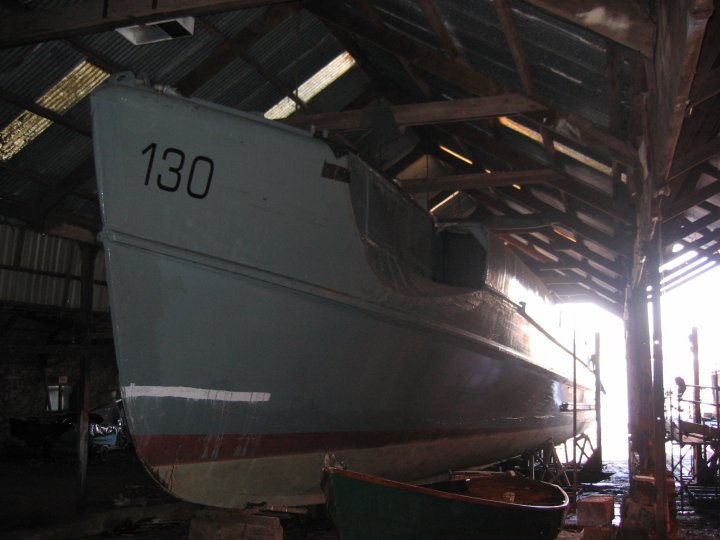 Built at the Johan Schlighting boatyard in Travemude, the S 130 was commissioned on Oct 21st 1943, under the command of Oberleutnant zur see Gunter Rabe, with the call sign Raven. At first she operated out of Rotterdam into the North Sea but soon switched to Cherbourgh to patrol the Western and Central Channel areas. During the beginning of 1944 she conducted many savage night actions and then became embroiled in the Allied, Operation Tiger, probably the biggest cock up that the British and Americans had so far made at sea. Operation Tiger was a full scale rehearsal for the American attack on Utah Beach during the forth coming D. Day landings. On the 27th April a German recognisance plane spotted the convoy off Slapton Sands in Devon and vectored two flotillas of E boats to the area. Meanwhile due to a communications mix up British escorting destroyers were removed from the convoy, leaving just a small force of M.T.B.s to cover the exercise. ( click here to read my article in ‘Tombstones’) 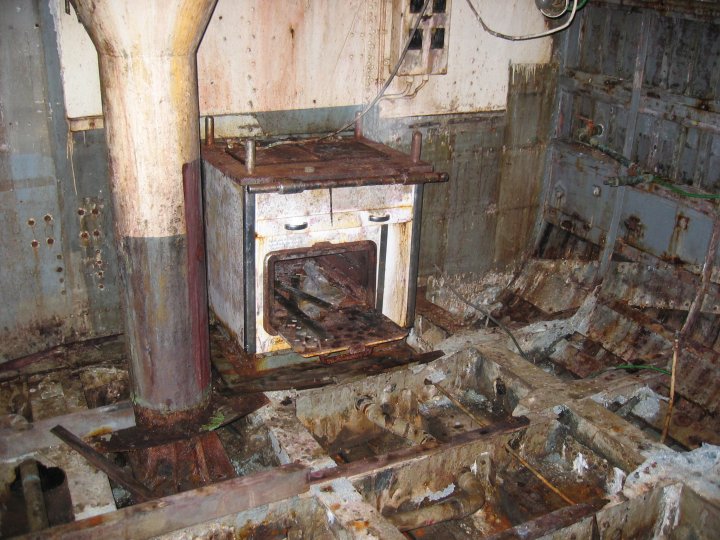 At just after one o’clock in the morning in the pitch dark, the E boats, steaming at over 36 knots fell gleefully upon the convoy sinking two landing craft drowning over six hundred men and causing such chaos in the dark, that the Americans started shooting at each other’s landing crafts, killing and wounding soldiers who by now must have thought they were in hell with the night sky lit up by the burning ships and the cry’s of the wounded and dying. The E boats got away scot free leaving over six hundred and thirty nine Americans dead or missing, four times the casualty list when they did the real thing on D.Day. The dead washed in on the tide all along the coast and were buried in unmarked mass graves to hush it all up. 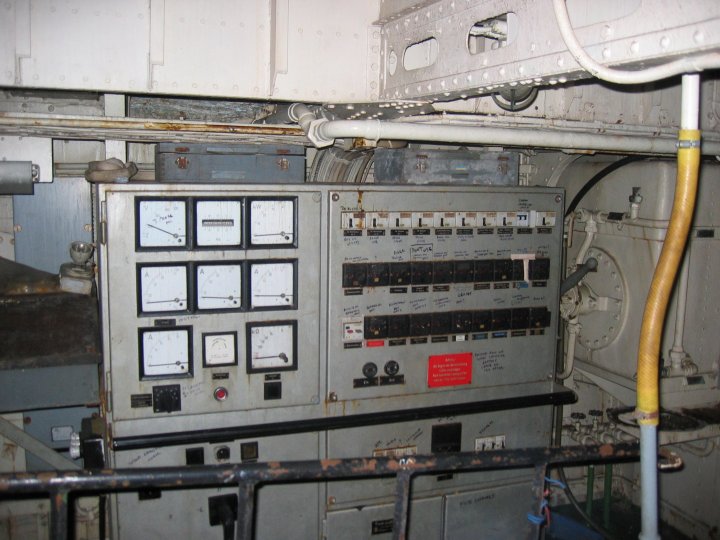 The S 130 helped to attack the Allied Fleet on D.Day, and as the Allies stormed ever onwards towards Germany she took part in the long retreat eventually ending up in Rotterdam as the War came to its final end. Taken as a British War Prize the S 130 was used for test purposes and re-engined to give a new top speed of 45 knots. It was then decided to deploy the vessel, with other captured E boats, to British occupied Germany to spy on the Russian Fleet. The boats photographed the Russian ships and gathered huge amounts of intelligence, and if they were spotted all they had to do was roar off at high speed. The Russians had nothing fast enough to catch them. Later in 1949, she was used to insert agents into the Baltic States. 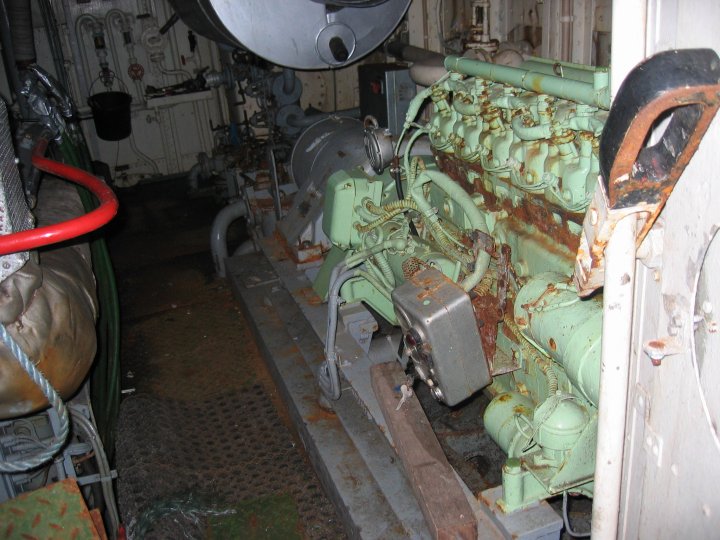 There should be three engines.

During this time the British recruited ex German Navy officers to run the boats with mostly German crew. The most notable of these was Hans Helmut Klose who later commanded a unit that landed agents on the coast to link up with the local partisans who harried the Russians in Poland, Latvia, and Estonia. He was so successful that the unit became known in secret circles as The Klose Fast patrol Group. After its success in inserting and more importantly, retrieving agents, MI6 decided to create a more permanent organization in 1951 which it ran until 1955, when due to leaky intelligence within MI6 and others, over forty agents were caught by the Russians who either sentenced them or turned them into double agents.

Interestingly all this joint operations with the ex German officers laid the foundation of what is now the German Navy’s Schnellbootflotille. In the spring of 1956 the units were abandoned and the boats including S 130, were handed back to the Germans where they were used as high speed training vessels. Most of their crews joined the German Navy, including Klose who retired in 1978 with the rank of Vice Admiral. S 130 continued to be a training vessel until 1991 when she was paid off in Willemshaven. She then became a houseboat until she was acquired by her present owners for restoration in 2003.

If you want to know more about the subjects below, click the links