The Falkland Islands have a total land area half the size of Wales and are made up of two main large islands, and over seven hundred small ones. The islands are basically very hilly, barren and windswept rather like Dartmoor or the Brecon Beacons, and you can have sunshine and sleet in the space of a few minutes. Because of the fierce winds there are no trees on the islands and gorse bushes had to be introduced to form some sort of wind break for the sheep, which form the main farming industry. 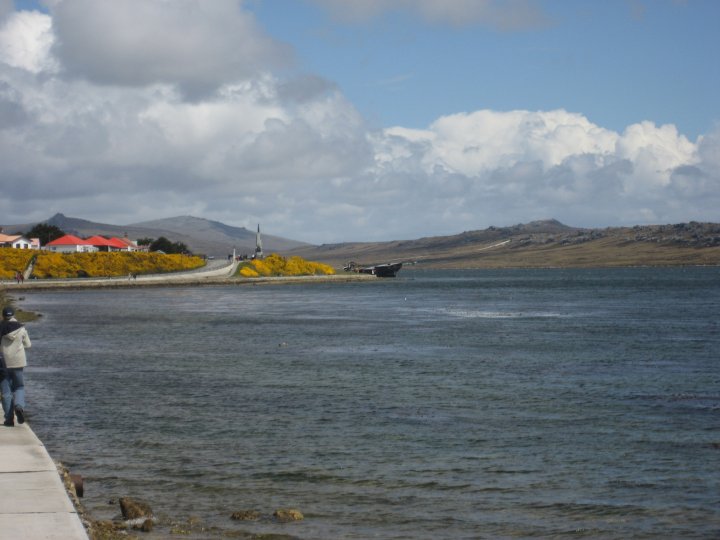 Looking away from the main part of Stanley.

Nowadays the population is nearly three thousand strong, of which two thousand live in Stanley. The remaining one thousand live on their sheep farms, which are collectively called The Camp. However the humans are vastly outnumbered by the various species of penguin, which number just under half a million breeding pairs. Since the end of the War in 1982 much has been done to improve the lives of the Falkland Islanders. New roads have been built along with schools and a hospital. All this has to some extent halted the drift of young people moving away. 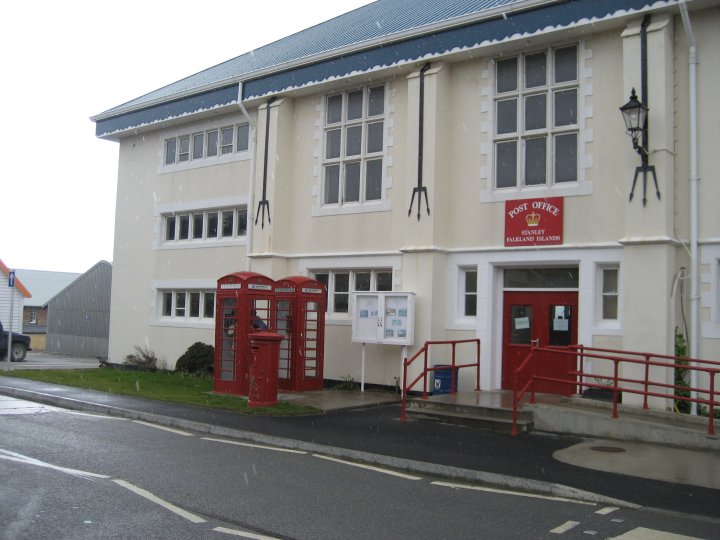 Economically the Islands are now much more prosperous mainly due to the fishing which brings in upwards of 24 million pounds a years due to fishing licences in their 200 mile unilateral zone. Tourism is also starting to make an ever bigger contribution. There is oil to be found at the moment but not in economic amounts, but if that happens then the population will definitely increase. 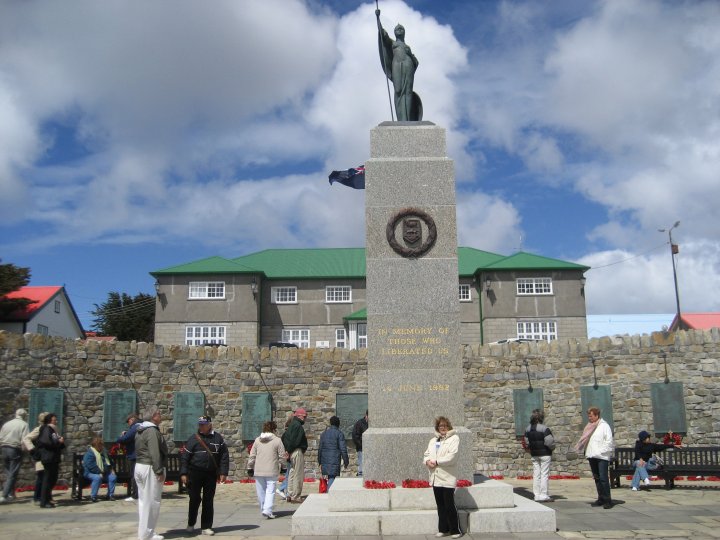 Although first sighted in 1592 by the English seafarer John Davis in the ship Desire, it took until 1690 for the first recorded landing by a Captain John Strong, who claimed it for Britain. Almost certainly other seafarers had sighted the islands over the years, and that’s how Argentina’s claim started. In the 1840s the island’s capital was moved for purely Naval reasons from Port Louis to Port Stanley and was named after the Colonial secretary of the day. 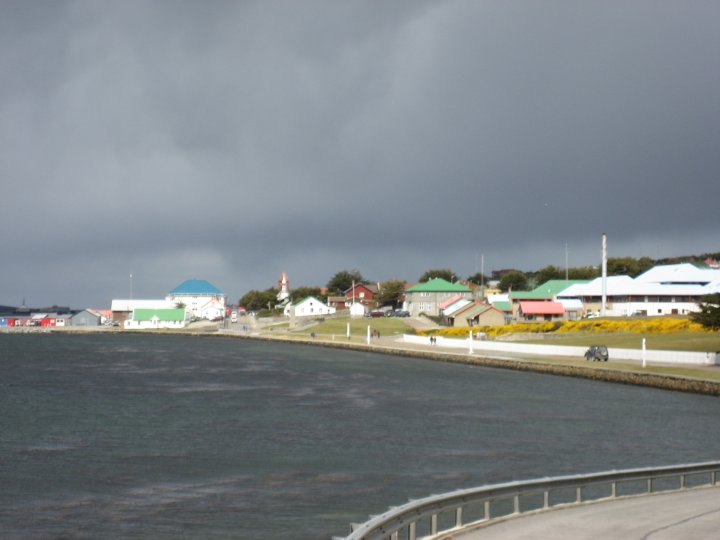 At the end of the nineteenth century, the Falklands became very important strategically for Britain who used the islands as a major coaling station for their Atlantic fleet. During the Great War the first battle of the Falklands ensured the Britain’s supremacy over the German Fleet and secured the passage around Cape Horn, which at the time was vital to Britain’s interests. Cape Horn is notorious for its fierce storms, and as the amount of shipping increased with the expansion of world trade and the coming of the whaling fleets, the Falklands were perfectly placed to provide repair facilities for storm-damaged ships. 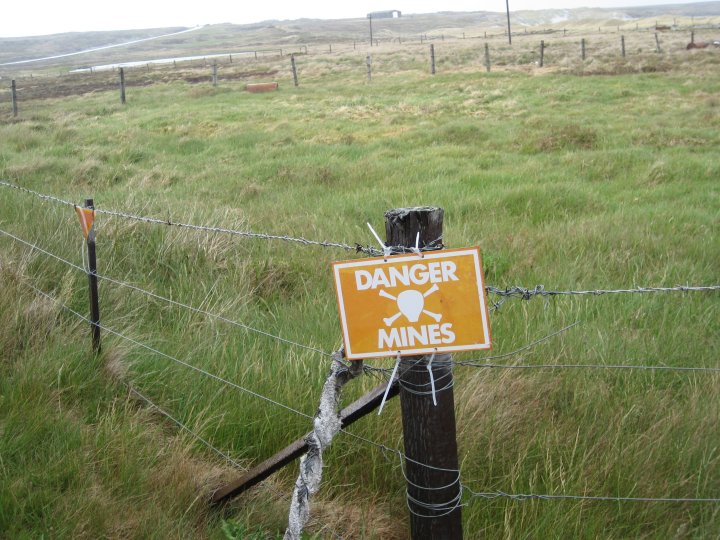 A grim reminder of the war. there are still plenty of minefields around.They will take years to clear.You can buy maps at the tourist office.

Many of the ships that limped into Port Stanley were often too badly damaged to be repaired and they were just abandoned where they ran aground, and you can still see them to this day. 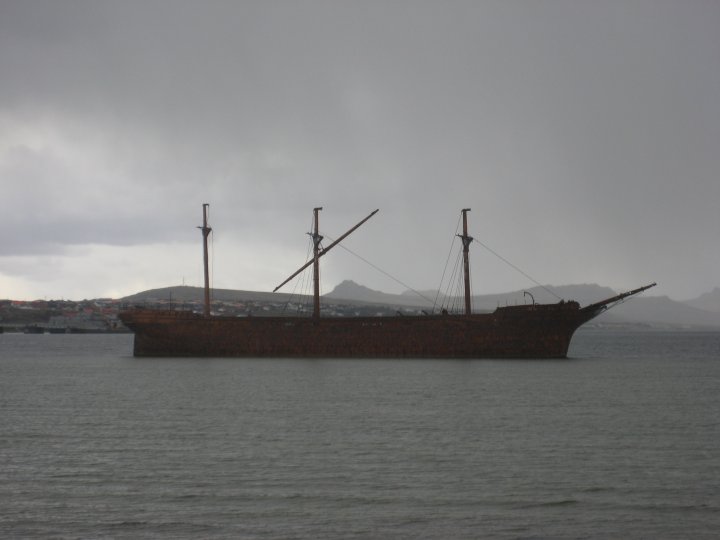 Incidentally during the Second World War, H.M.S.Exeter retired badly damaged to Port Stanley after taking her part in the battle of the River Plate, which sealed the fate of the mighty Graff Spee. The museum has some great photos of her. In the sixties she became part of H.M.S.Bellerophen in Portsmouth where she trained young seamen and Royal Marines, like me, in the art of seamanship.