Twelve miles North West of Hartland Point and the North Devon coast lies the rugged granite island of Lundy. Just three miles long, this little island of volcanic origin lies right at the entrance to the Bristol Channel, directly in the path of what once were the major shipping routes to the coal ports of south Wales and Bristol itself. 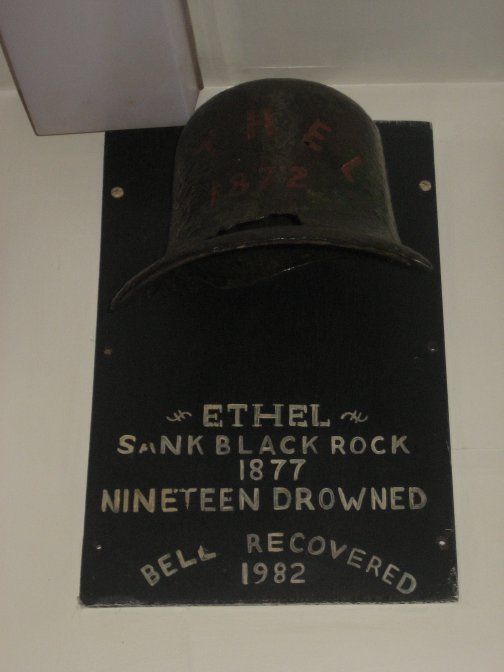 One of the many wrecks over the years.

Although Lundy has probably more than its’ fair share of shipwrecks, it is nowhere near what it could have been, considering how many ships have passed this way in the last two centuries alone. It is estimated that in its heyday, almost a million ships passed the island every year. Even so, in 1786, the merchants of Bristol were so concerned at the losses suffered around the island, that they offered to build and maintain a light house at their own expense. 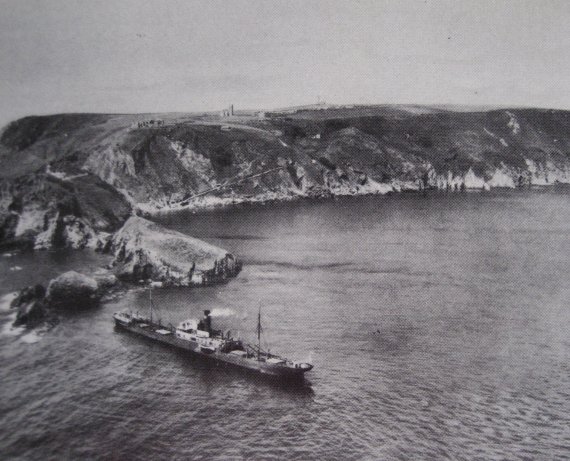 The Carmine Filomena wrecked in 1937.

Lundy has a recorded history going back to the time of King John and since then its ownership has changed many times. With only one landing place and three hundred foot high cliffs, Lundy is a natural stronghold and it’s no surprise to find that over the years it has been home to pirates and smugglers alike. With no natural resources other than stone there was not much to offer anyone that wanted to settle on Lundy and anyone who did could be storm bound on the island for weeks. 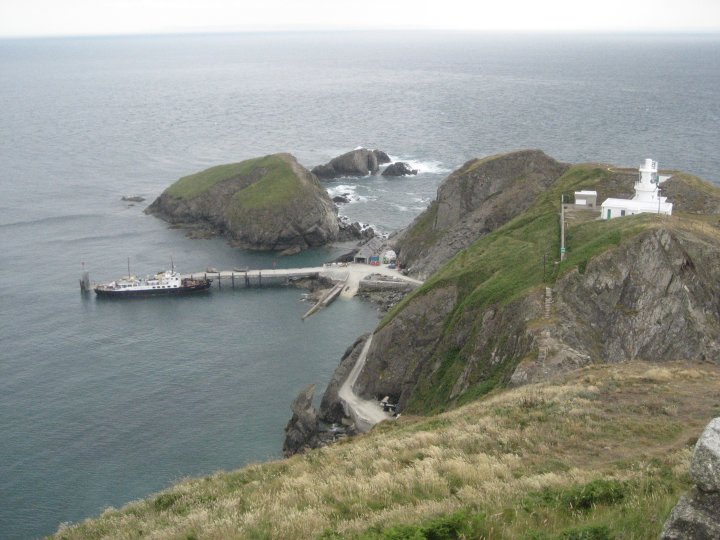 The one and only landing spot

Today the island is owned by the National Trust but maintained by the Landmark Trust as a nature reserve. There are tons of birds to spot including puffins, loads of seals and dolphins and the occasional basking shark. It’s a magical place that’s easy to visit for the day by getting on the M.V.Oldenburg either from Ilfracombe or Bideford. If you want to stay on the island you can stay in chalets (you have to book well in advance) and there is a great pub that does excellent meals. It’s a great day out, and has the added attraction of a really fantastic wreck story with a walk to match.The wreck in question is the battleship H.M.S. Montagu. 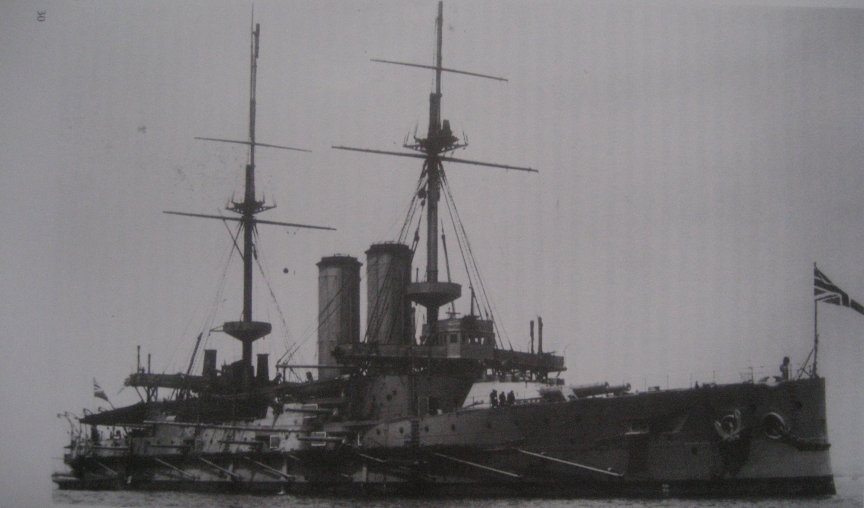 On the afternoon of 29 May 1906 the almost new battleship anchored off Lundy during a Fleet exercise. Her job was to communicate with the Isles of Scilly using the recently installed wireless telegraphic signalling apparatus. This equipment was the cutting edge of technology at the time and the Admiralty was expecting great things from it. However the distance to the Scilly Isles was too great, and in normal circumstances the Montagu would have steamed closer to the Islands and continued her trials. Unfortunately she was now enveloped in a thick fog and anchored as she was, right in the main shipping lane there was a real risk of another ship colliding with her. In the end it was decided to move closer to Lundy. As the great ship got under way soundings were taken, and as the Montagu crept closer towards the coast a strict lookout was kept. At about 2 o’clock in the afternoon, the depth was given as seventeen fathoms and the navigating officers was just congratulating himself in placing the ship safely four miles off Lundy when there was a great crash and grinding of metal, and the Montagu shuddered to a halt. Unknown to all on board, they had just run aground on the Shutter Rock at the south western corner of Lundy Island. The ship’s massive engines were put hard astern ripping off her propellers, but the Montagu was held fast and started to leak badly. 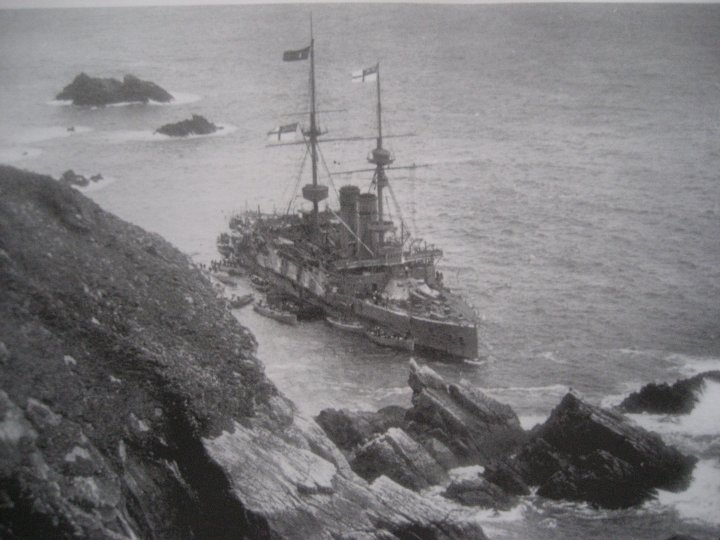 The Montagu as she struck.

A landing party was detailed to scramble up the cliffs and go and find help. When the men got to the top of the cliffs they could hardly see where they were because of the fog but came across a rough path. If they had turned left they would have come across the lighthouse just half a mile away, but they turned right and marched the whole length of the island before stumbling into the lighthouse keeper’s cottage. The Naval Officer in charge of the party was convinced they were on the North Devon coast and railed at the poor keeper to contact the authorities. The lighthouse keeper finally realised that they thought they were at the Hartland Point Light and had to forcefully point out the Officers mistake by saying that it was hardly likely that he (the keeper) did not know which lighthouse he was serving in. 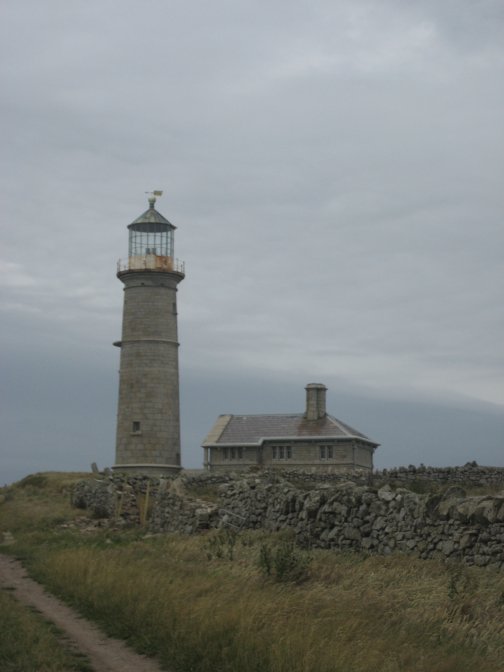 By now the Montagu’s lower compartments were all flooded and the hull was grinding nastily against the rocks. The Navy had no salvage equipment so they sent for the Liverpool Salvage Company and their most experienced officer Capt. Young. Since they had asked for their help you would have thought the Navy would have let the Salvage Company get on with it, but no. Capt. Young was relegated to the status of assistant and the Admiralty put in their own man, Admiral Sir A.K.Wilson. Although he was a brilliant officer he was completely out of his depth when dealing with the salvage of such a large battleship. Almost at once he ordered a huge flotilla of ships to bring all sorts of gear to the site. Working parties of hundreds of seamen were put aboard the Montagu, all with conflicting agendas. The upshot was chaos and confusion with everybody getting in each other’s way whilst the ship sank lower and lower in the water. 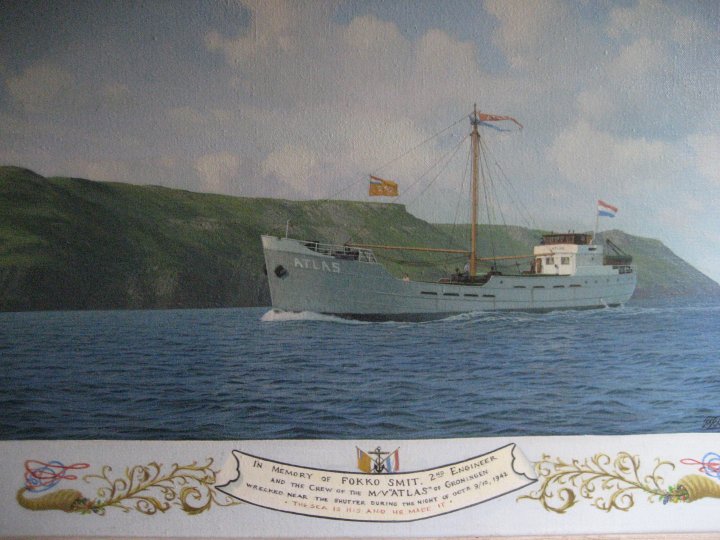 The arguments and conflicting ideas raged unchecked with Capt. Young of the Salvage Company being told to mind his manners. The last straw came when the Admiral seriously suggested that the Montagu be filled with cork and be allowed to float off on the high tide. It was by now obvious to all that the great battleship was lost and in desperation the Admiralty turned to Capt. Young to salvage something from the shambles. The first thing he suggested was the removal of the battleships huge 12 inch guns. Each of these weighed 48 tons and was worth a great deal of money. They also were badly needed by the Navy to rearm other ships as the supply of guns was extremely short. Overnight Capt. Young assumed complete charge of the salvage operation. All the ships were sent away along with the working parties. All that was left were the employee’s of the Liverpool Salvage Company. 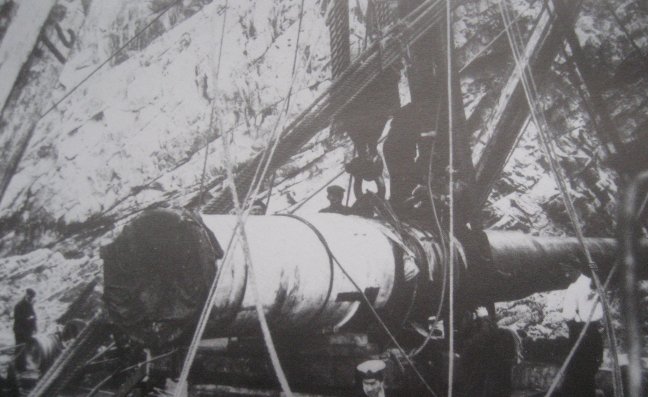 One of the huge guns.

In order to remove the guns Capt. Young and his crew blew out part of the ships side to allow the barrels to drop down into the hull. He then had massive 60 ft sheer legs constructed to lift the barrels into the waiting lighters to be taken away to Pembroke Dock. Two barrels were removed in twenty one days, and to celebrate, a ‘Sods Opera’ (concert) was conducted on the wreck. The chief diver, Alf Gloyne, amazed everyone with a stunning tap dance routine, others played accordion and Capt. Young gave a spirited rendition of ‘Blow the man Down’ to a by now happy, and very drunk audience. The two after barrels soon followed and the crew then set about stripping out the condensers, pumps and tons of non ferrous metal. Even the propellers were recovered when the anchor of one of the salvage vessels got tangled up in their remains. 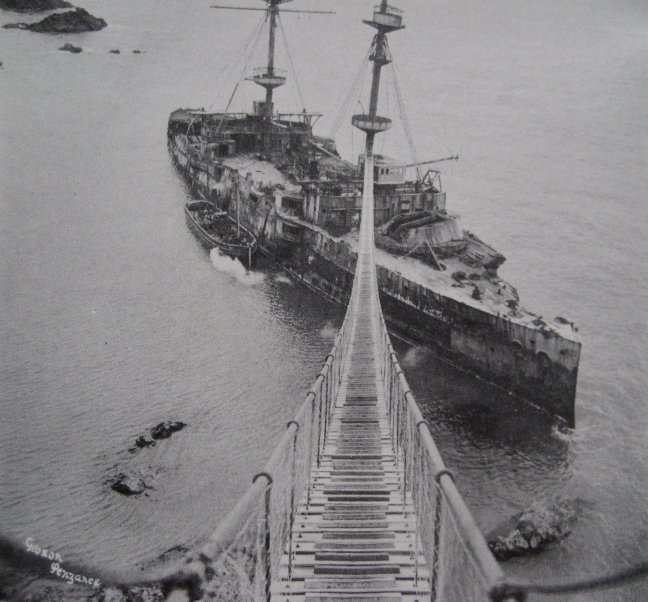 By now the official salvage operation was coming to a close. The Courts Martial had found both Capt. Adair and his Navigating Officer Lt.Dathan, guilty of hazarding the ship, and they were both severely reprimanded. With the end of these proceedings the Montagu was ‘paid off’ and in January 1907 the Navy put her up for auction to be broken up where she lay. She was bought for £4250-00 by the Syndicate of South Wales Adventurers and it proved to be a wise investment. An aerial footway over 500 ft long was constructed from the top of the cliffs to the roof of the Montagu’s chart house, and also a path was made down the side of the cliff using granite steps and then footholds were carved into the rock. These became known as the Montagu Steps and you can still see them today. 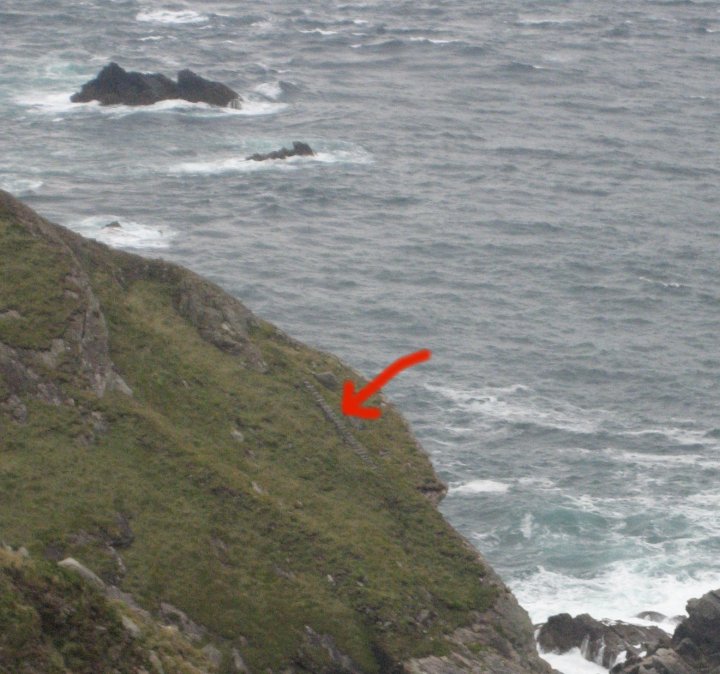 You can just see the Montagu Steps.

Work was only possible for a short time at low tide, and so speed was of the essence. Lighters were brought alongside and slowly piece by huge piece, the armour plating was removed along with a vast amount of copper and brass. Explosives were used extensively and this had the effect of finishing of any structural strength left in the ship. By October 1907 huge storms, the worse Lundy had seen for years started to pound the wreck to pieces and so the salvors suspended their operations and retired to count their profits. Soon the Montagu disappeared completely beneath the waves and all that was left to mark her passing were the granite steps and a few bits of rusting metal that supported that fantastic Ariel walkway.

I am very grateful for the following information and photo from Chris Howell. He has a walking stick made by his great Grandfather’s company, the shaft of which came from the deck timber of the Montague. These sorts of sticks are known as ‘relic canes’. I confess that I had never heard the term before so Chris sent this photo of the inscription on the cane. You can just make out the inscription ‘WOOD FROM H.M.S. MONTAGU. The siver Cartouche is inscribed LS, and the hallmark date is 1907.The stick is complete with original ferrule and original length of 36”. 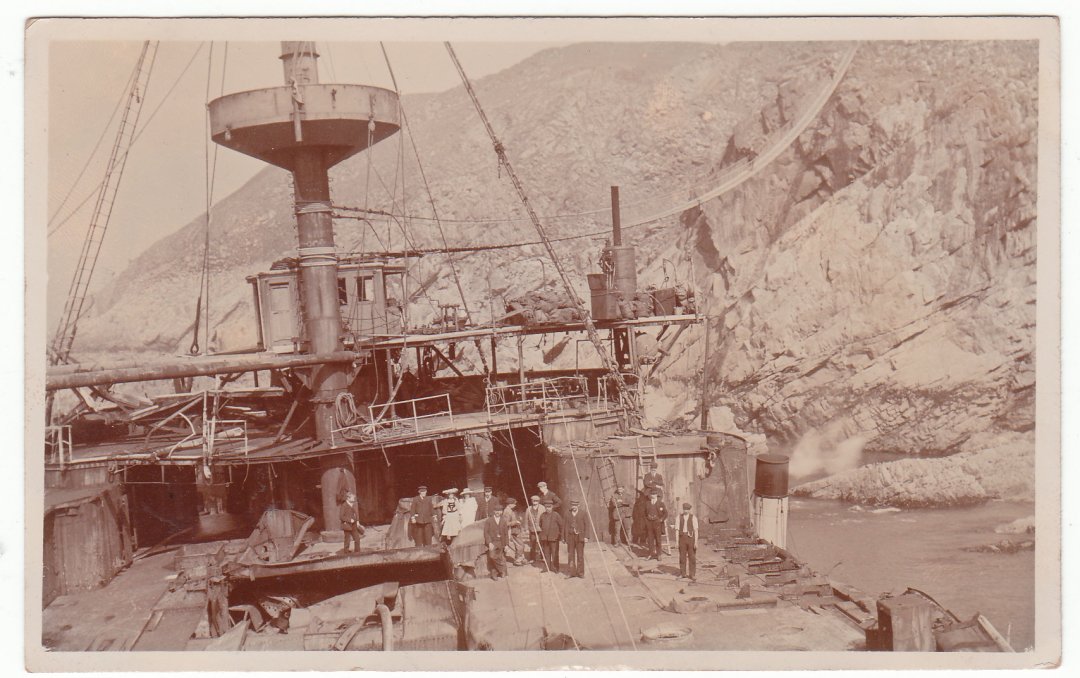 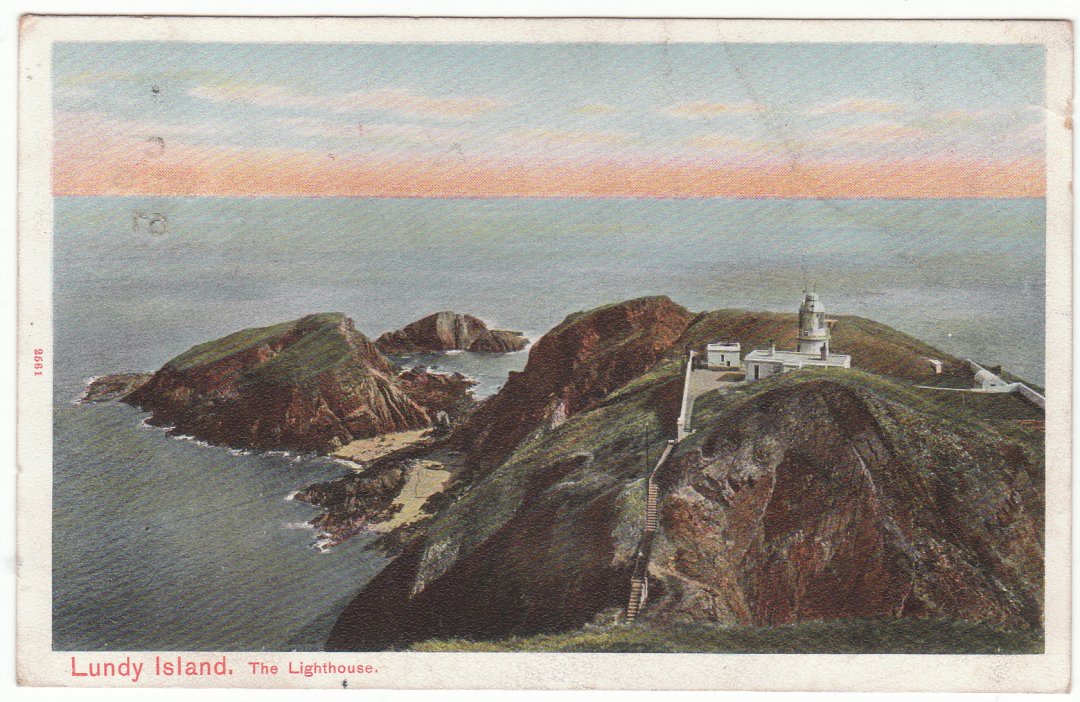 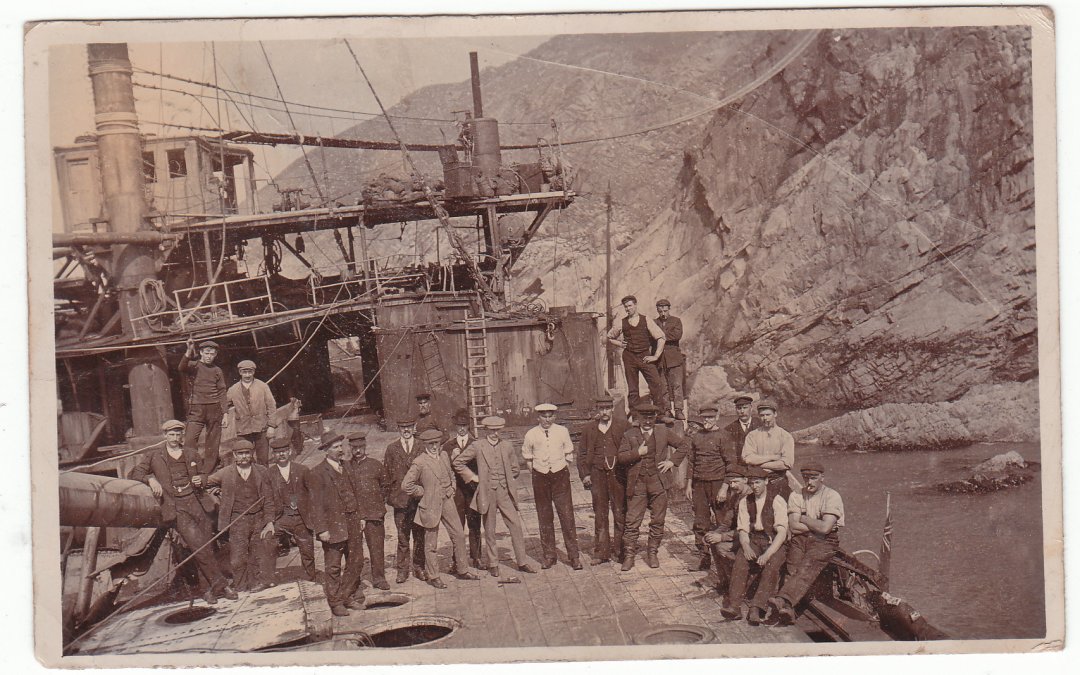 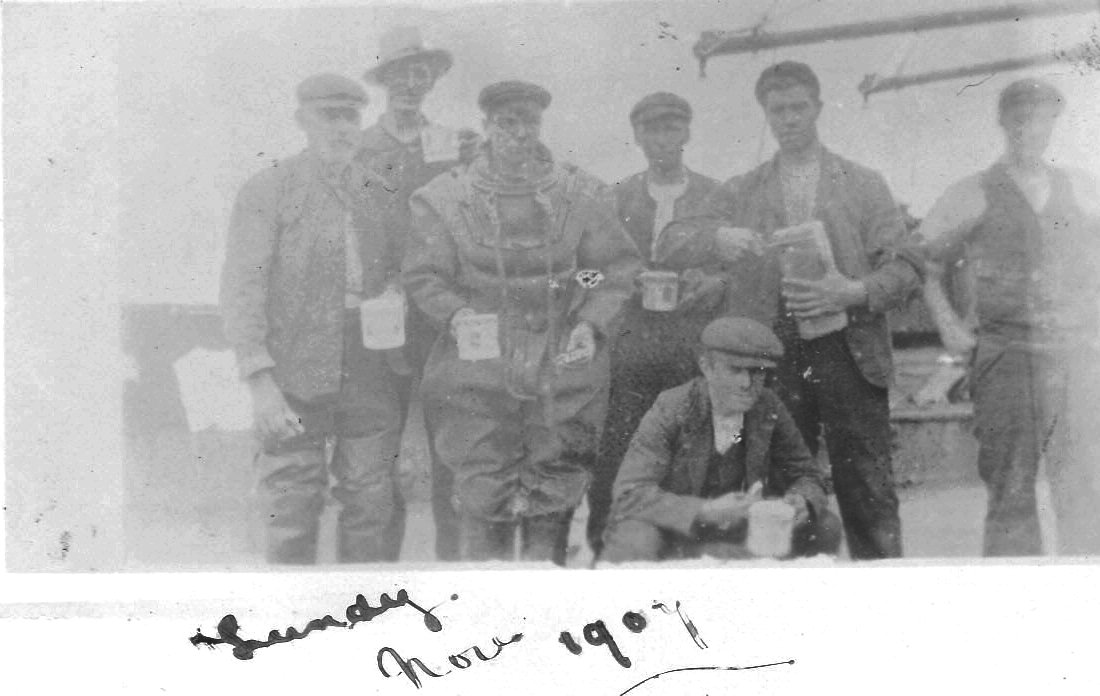