The Georg Thiele was a Leberect Maass Class Destroyer with a displacement of 2200 tons, and a complement of 315 officers and men. She was 374 feet long, 37 feet in the beam, and had a draught of nine and a half feet. Her machinery, performance, and armament was similar to the Dieter Von Roeder Class, except that she had four 3.7cm and six 20mm guns.

The Georg Thiele, Z2, was launched on August 18th 1935 and was completed in February 1937. She had a few teething troubles with her engines, and prior to her becoming part of Group 1 (Narvik) she was having repairs at Bremen for a troublesome water pump. However on April 6th 1940 all was repaired and the George Thiele embarked two hundred mountain troops and sped off to rendezvous with the rest of the Task Force. 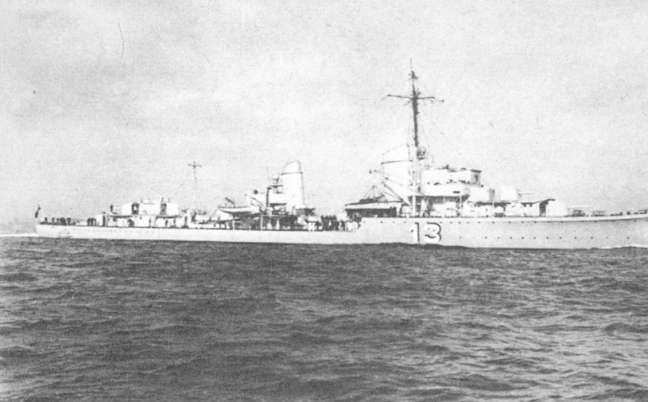 After a dreadful journey in gale force winds and high sea’s the George Thiele, in company with the rest of the Destroyer group successfully disembarked her troops at Narvik. On April 10th at the start of the First Battle of Narvik, the Georg Thiele together with the Bernard Von Armin were lying in a side Fjord (Balangenfjord) and came out onto the British flank as they withdrew after successfully sinking and crippling five German Destroyers in Narvik harbour. 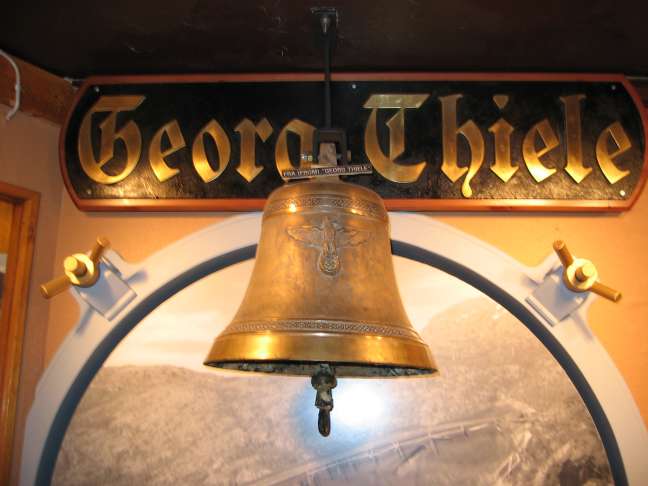 The bell from Z2, now in the Museum.

Amongst others, the George Thiele fired on the British Destroyer Hardy, scoring hit after hit and was mainly instrumental in driving her ashore. With the Bernard Von Armin she then turned her attention to Hunter and Hotspur, sinking Hunter with gunfire and a torpedo after she had damaged Hotspur so severely that she became uncontrollable and collided with the Hunter at thirty knots. The Georg Thiele was then hit hard herself in one of her boiler rooms, had one of her guns destroyed and her fire control system put out of action. 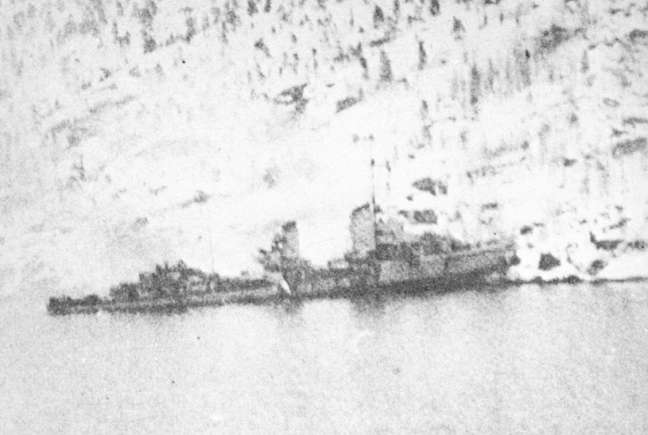 By the time of the Second battle of Narvik, on April 13th, the George Thiele was only semi operational. She could manage 27 knots in a short burst, and the rest of her guns had been brought under local control so could all be fired. In addition to this she still had six torpedo’s.In the closing part of the battle, when the four surviving but badly damaged German Destroyers withdrew up Rombakisfjord, she acted as a rearguard so that the crews of the damaged destroyers could be landed before they were scuttled. 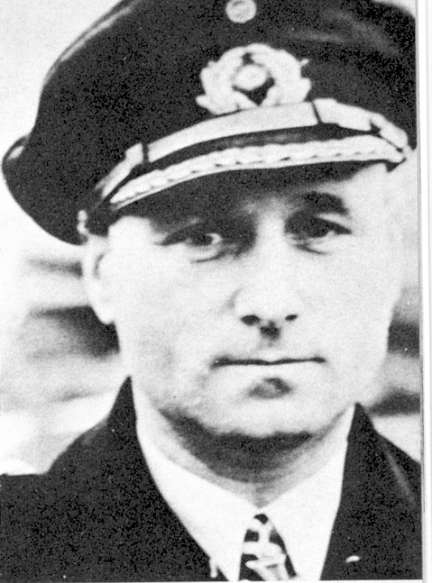 Unfortunately, she was caught by the British Destroyers Eskimo and Forester, who repeatedly blasted her with gunfire. Fighting to the end the Georg Thiele unleashed one of her torpedo’s and blew Eskimo’s bow off, before running herself hard aground. 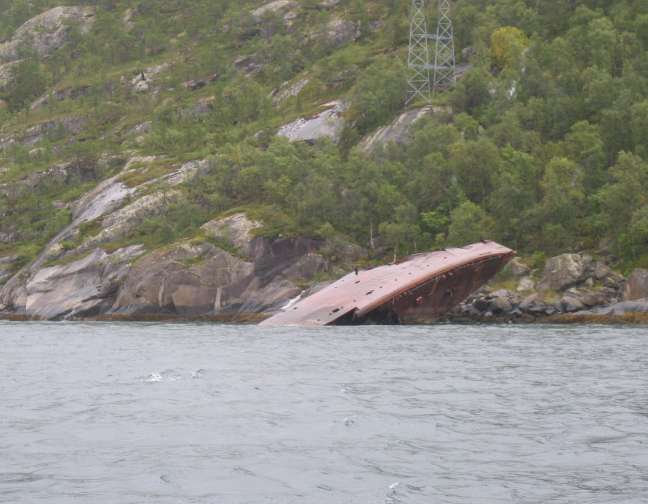 The wreck as it is today, bows stuck up in the air.

This is the wreck I came to see. The bows stick out of the water and the stern is in 52 meters. Fantastic sight. We went down to the prop shaft where Steve had to tie on the rope This was a slight problem as it was 40 meters down and we were not exactly sure where the wreck was.Anyway as usual, Steve sorted it out, and once there it was great. Just below us was one of the guns pointing astern, the other is at 52 meters, then you come up the cliff of the hull which is lying on its side. On the right of the hull is the deck, with torpedo tubes, search lights and loads of portholes. As you go up towards the bow there are great caverns with loads more portholes with glass. All around were bits of brass and loads of switches. 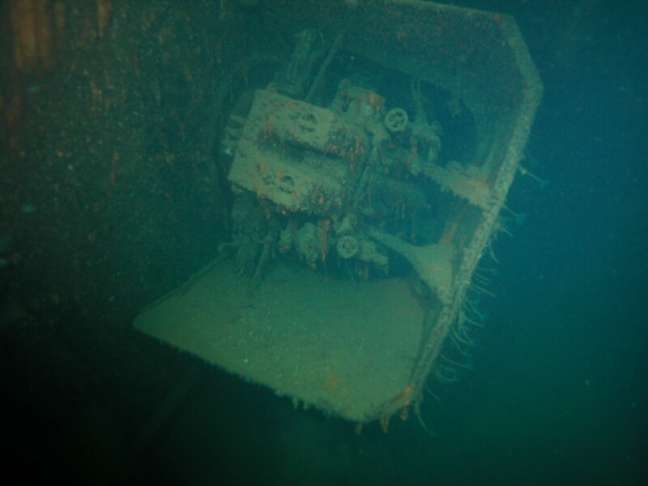 One of the guns. Photo F. Bang

On the torpedo tubes on the second dive, I saw the fire selector and the rest of the tube bits including the gas bottles. Near there was a small two barrelled gun (probably anti aircraft). Near this was what looked like a breach from another gun lying on the floor. Over to one side was a broken mast with lots of electric insulators lying everywhere. When you get to the bit of the bow that hit the rocks, you can go down a tunnel back to about 40ft. This whole area is covered with plumose anemones, and there are some great anemones like snake locks but much bigger. 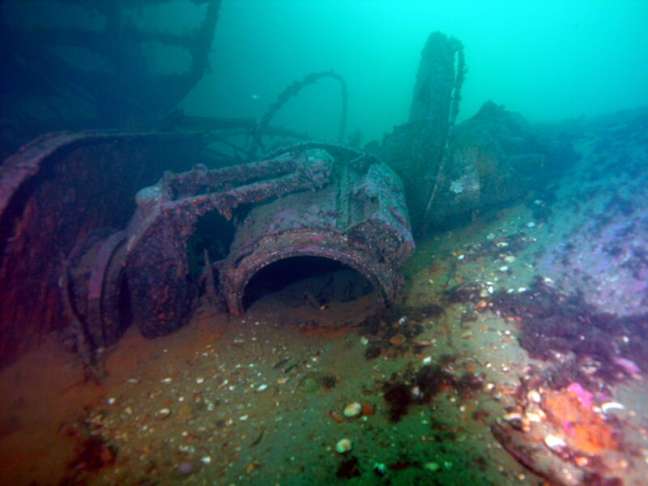 On the second dive more of the same, but the highlight was to go in another little tunnel at about 60 ft and swim up through the wreck to about 15 ft. The tunnel got tighter and tighter, and on either side were holes through which you could see other compartments with loads of portholes. As it got tighter it got a bit iffy, but you could see out of the top, so all was well. Then we just swam along the keel not really wanting to leave, and gently on up to the surface. Because its right on the shore the dive boat likes to stand off, so it can be a bit of a long surface swim. This is a great wreck dive and was voted the best off all the ones we did. 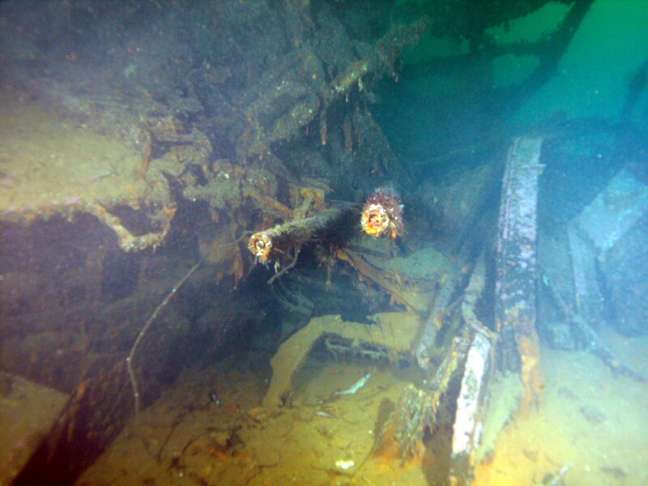