The Herman Kunne, together with the Hans Luderman, Wilhelm Heidcamp, Dieter von Roeder,and Anton Schmitt were all Dieter Von Roeder class destroyers. They had a displacement of 2400 tons and a complement of 313 officers and men. They were 384 feet long, 38 ?feet in the beam with a draught of 9 ?feet. The Destroyers were powered by two shaft geared turbines with six boilers producing a total of 70,000 horsepower which gave a top speed of around 38 knots.

Their armament was impressive consisting of five 5inch guns all in single, hand worked mountings, which fired ten rounds per gun per minute. In addition she had six 3.7 cm automatic aircraft guns in two twin, and two single mountings and twelve 20mm guns in five twin and two single mountings. As well as all this the destroyers also carried eight 21 inch Mark G7A torpedo’s in quad mountings. The only fly in the ointment was the fact that the 5 inch guns only had 100 rounds a gun, and that in the end, more than anything else, sealed their fate.

At four thirty on the morning of 10th April 1940 the German Destroyers Herman Kunne and Hans Luderman lay alongside the fuel tanker Jan Wellam, and were both in the process of refuelling. Nearby in the harbour were also anchored the Destroyers Dieter Von Roeder, Anton Schmitt, and the Willhelm Heidkamp, along with about twenty five other cargo ships. It was snowing hard and visibility was down to under a thousand yards. It was then that the British Destroyers struck, sweeping into the harbour sinking the Anton Schmitt and Willhelm Heidcamp. There was total confusion amongst the Germans who at first thought that they were under air attack. As the British turned around in the Beisfjord, the Dieter Von Roeder was hit and caught fire. The Herman Kunne was not actually hit in these exchanges but suffered some engine damage as a result of the shock waves from the explosions in the harbour. 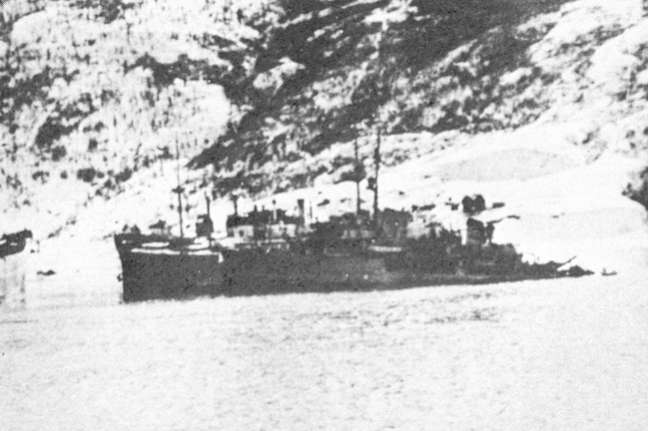 When the British withdrew, the Germans had a chance to regroup their forces, refuel some of their ships, and realize that they were running disastrously short of ammunition. Commodore Bonte had been killed in his Flagship, Willhelm Heidcamp in the first attack, and so Captain Bey took over. He only had three undamaged destroyers left, with only half their ammunition, and virtually no fuel. His four other ships had fuel, but were extremely badly damaged. While he was trying to sort out his problems, Captain Bey was ordered to return with his group to Germany. He hesitated to obey, because with the light spring nights it was almost impossible to sneak out of Vestfjorden without the British spotting him. In the end he judged the risk to be too great, which was unfortunate for him, because at 10 o’clock on April 13th he received reports that the British were steaming into Ofotjorden. The Second Battle of Narvik was about to begin. 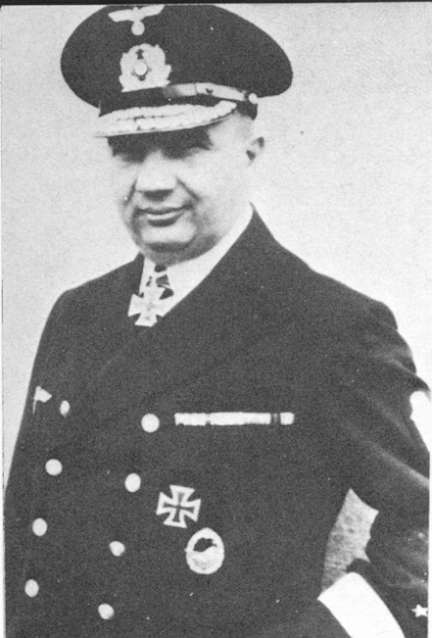 Fregattenkapitan Erich Bey, Senior Officer 4th Destroyer Flotilla. Survived the Narvik campaign only to be lost when serving on the Battleship Scharnhorst.

To better organize his forces, Captain Bey decided to sacrifice the Erich Kollner, which was very badly damaged. He turned her into a floating gun battery, taking off most of the crew and only leaving enough men to man the guns. She then limped out to Tarstad with orders to engage the British Fleet when they appeared. The Herman Kunne followed her out to Tjeldbotn. An hour later, a Swordfish Aircraft from the Battleship Warspite was spotted by the Herman Kunne, with the result that the British lost the element of surprise. In the event it didn’t matter much. The Warspite pulverized the Erich Koellner and sunk her. The Herman Kunne was badly damaged, but managed to retire behind a smoke screen to Narvik. 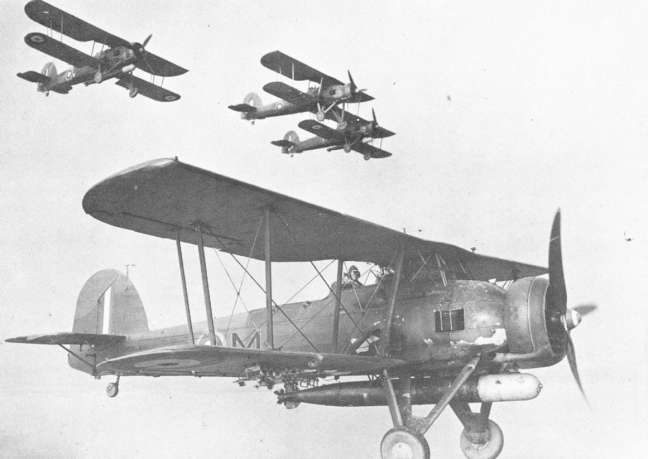 The Swordfish, obolete when the War started, was still very effective.

In the harbour the rest of the German Destroyers came out of the harbour to face the British who were steaming towards them. For over an hour the battle raged without either side really making any impression. The Germans however were in real trouble because nearly all their ammunition had been used up in the fierce fire fight, so Captain Bey ordered then to withdraw to Rombaken. The Herman Kunne, never received that order and sailed into the Herjangsfjord with the British Destroyers Eskimo and Forrester in pursuit. Out of ammunition, Korvettenkapitan Koethe decided to beach his ship, land his crew and then scuttle the ship. 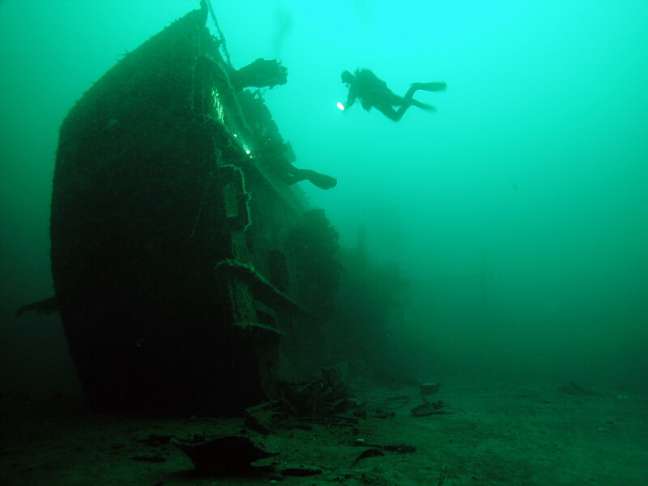 He drove the vessel ashore at Trollvika, Herjangsfjord at ten past two in the afternoon. All the crew managed to scramble ashore which was just as well, because ten minutes later Eskimo and Forrester fired three torpedo’s,into the Herman Kunne which caused an enormous explosion and set the Herman Kunne on fire. As the smoke from her funeral pyre darkened the sky she finally slid beneath the waves. 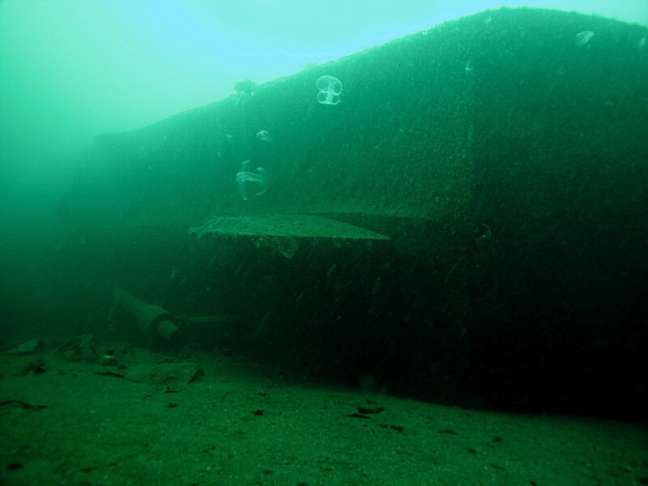 This wreck was stuck down the side of the Fjord. Bow in 2 ft, stern in 40 meters. We went down to 119 ft. We had been told we would have great viz, but in fact needed a torch.However this is another vast wreck just like the G.T. lying on its side, but no guns.Down at the stern are the remains of the rails used for minelaying. There is loads of stuff in the debris field like leather thigh seaboots, leather ammo pouches, a deadlight, shoes, and some uniforms, just to give you a flavour. 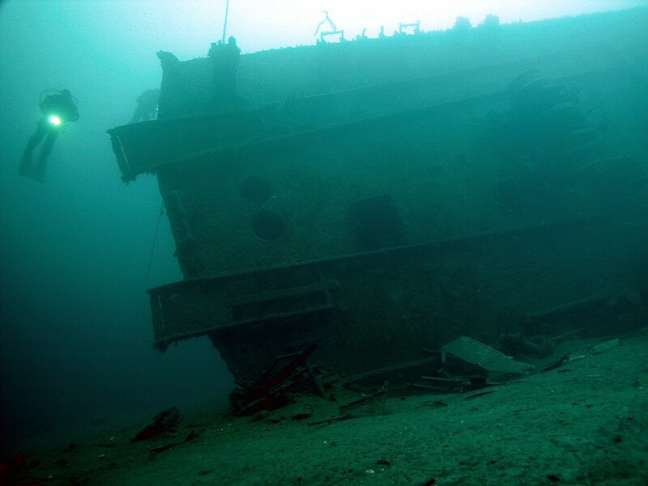 From 60 ft up to the surface the wreck is one vast jumble of twisted metal with loads of small fish and some large cod. You could spend ages going trough it all and it is very scenic. Some of the guys spent time unfolding uniforms, and others just wandering around looking. i spent nearly an hour here and frankly could have spent days. Always the same, to little time. great dive, and a great atmospheric wreck.