1941, and the biggest threat in the Atlantic besides submarines and the savage gales, were the surface raiders Tirpitz and Bismark. In an effort to contain these ‘super ships’, the Admiralty decided to block the passage between Iceland and Shetland with huge minefields, and to that end requisitioned merchant ships from the Port and Prince shipping Companies. One of those ships was the Port Napier, a brand new twin screw diesel ship built for the meat trade with New Zealand. After being taken over she was rapidly converted to a mine layer, with two inch thick armour plating being added to her sides, and armed with two four inch guns on her forecastle, together with various anti aircraft weapons. Magazines were fitted, and the necessary hoists and winches installed to load and launch the six hundred mines that she could now carry.

The mine laying squadron that she joined was based at the Kyle of Loch Alsh, and in 1941 they were hard at work mining the vast gap to the north of Shetland. On November 27 th, the Port Napier, along with the rest of her squadron loaded up with mines in preparation for sailing that night. Now in those days it was common practice to insert the detonator into the mine whilst still in harbour, as it was often very difficult to do so on the deck of a heaving ship in heavy weather. By late evening the port Napier had fully armed most of her six hundred mines, and since they were due to sail shortly everything should have been perfectly safe. As luck would have it however, a fierce gale blew up and funnelled down the Loch catching the Port Napier unprepared, and she started to drag her anchors. An eleven thousand ton ship filled with mines dragging her anchors in a howling gale is no easy thing to manoeuvre, especially in a confined space. Very quickly the Port Napier was careering completely out of control, and soon she smashed into an anchored collier who’s anchor chain fouled her propellers. 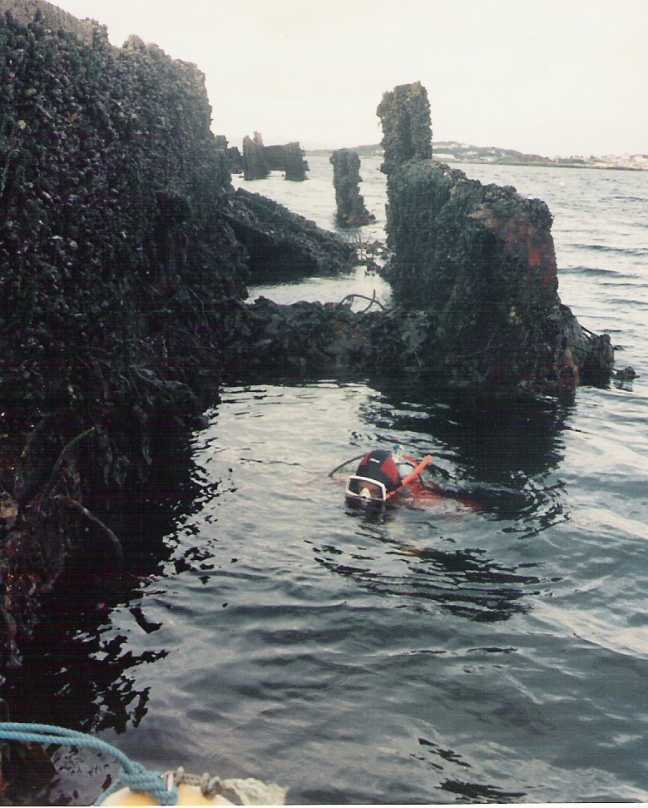 The Wreck is lying with one side showing.

With both engines stopped the Port Napier and the hapless collier continued to drag right across the Loch towards the Isle of Skye, where finally their combined anchors got a grip and brought them up safely in a shallow bay close to the shore. The next morning the Port Napier started the job of clearing her propellers and it was decided that they might as well complete her refuelling while they were at it. Halfway through the refuelling a fire started in the engine room and within minutes it was completely out of control. With the engine room a raging inferno, attention was concentrated on the two mine decks directly above the engine room, which of course were full of armed mines. Whilst the rest of the crew abandoned ship, the mine party , with almost unbelievable courage, went back to the mine decks and started to remove the detonators. 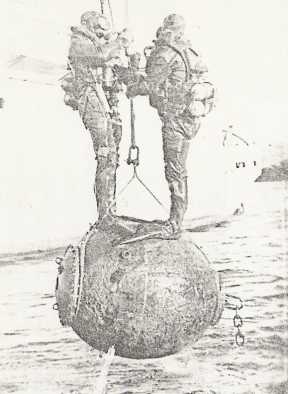 Recovering a mine. Very Health and Safety.

After about twenty minutes the lower mine deck became white hot and it became obvious that the ship could not be saved. The mining party was ordered off the ship, and the Port Napier was left to burn. After a while the fire seemed to die down and once again a party of volunteers scrambled back on board to see what could be saved. Once on board however the crew found that the fire was burning just as fiercely and moreover the mine decks above the engine room were now starting to buckle in the heat. The volunteers started to chuck mines down the stern chutes, but soon the heat and smoke became to much for them to endure and so they had to abandon ship once again. They were not a moment to soon. As they safely cleared the ship there were two huge explosions. The first blew bits of the ship onto the Isle of Skye, some going two hundred feet into the air, and the other explosion shot a huge column of smoke and flames that mushroomed out over the Loch like a dark stain. 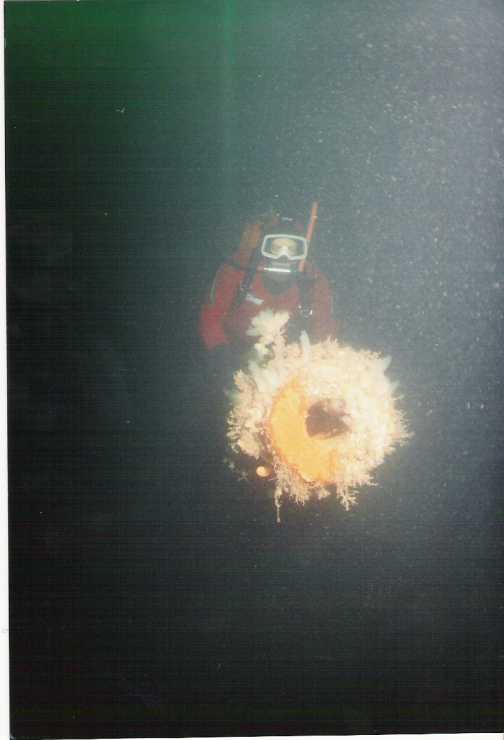 Down the barrel of a gun.

As people on both sides of the Loch watched in morbid fascination, the Port Napier slowly rolled over onto her starboard side and came to rest in seventy feet of cold green water. With her back broken, and about one hundred feet of her port side blown away they was no hope of salvage, so she was abandoned where she lay. Today the Port Napier still lies in the little bay where she was abandoned. She is easy to find as bits of her stick out of the water at most states of the tide. The great thing about this wreck, is that because most of her port side plates are missing, you can penetrate deep into the wreck without fear of being trapped. All you have to do is look up, and there is the surface light shinning down through the wreckage showing you your way out. 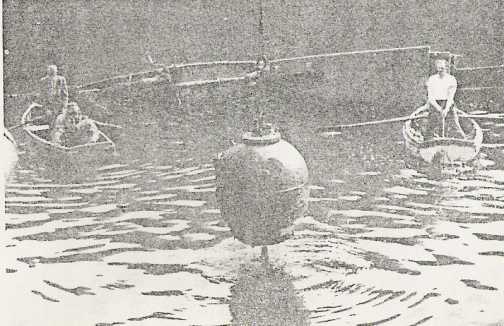 You can just see the ‘amatol soup’ pouring out of the mine.

Because it is such a big wreck you really need to concentrate on one end or another, and have two or more dives if at all possible. The water is very clear and visibility is usually twenty five feet or more with virtually no current. The bow of this ship is amazing as it is completely intact with the starboard side still held well clear of the bottom, so you can swim right underneath it. Because the ship is on its side it takes a bit of getting used to, but you soon pick out the winches, bollards, and best of all the four inch gun which is more or less intact with lots of well polished brass that just will not come off. Surprisingly the wooden deck covering is still intact, covered in white tube anemones, and is a great site with most of the forepeak railings still hanging in place. All the hatches and doors are still there and most hang open giving access to electrical machine spaces and gangways inside the ship. 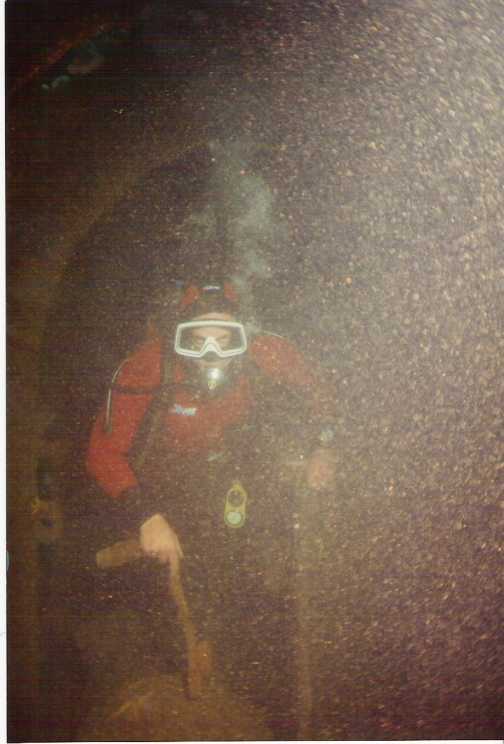 A bit murky inside.

Further back towards mid ships we entered the wreck and swam down a great iron tunnel, probably one of the mine chutes, and came out of a hatch in the forecastle onto the main deck. Incidentally the second four inch gun is right on the surface covered in so much weed that you can easily pass it by. The stern section is a real eye opener. The prop shafts are still there and so is the opening where the mines were discharged overboard on that fateful night. Inside these chutes you could see right up through the decks, a misty green light filtering down towards you. Because there was no danger of being trapped we swam right along the mine chute, then down into some huge machinery spaces. All around were great pieces of machinery jumbles up with broken pipes and smashed up metal, all covered with a deep layer of silt.

Just a part of the ship that was blown all over the Loch.

Further down into the ship we came upon another machine space, and on the other side of this we could see a small oblong of green light which we carefully swam towards. It turned out to be a small hatch in the stern covered with a broken railing. A bit of gentle manoeuvring and we were back out of the ship and into open water. Absolutely incredible. I could go on about the clouds of scallops, and the shoals of other fish which festoon this wreck and not dwell to long on the seals and the huge pieces of wreckage that were blown onto the nearby beach, but it would all pale into insignificance against the sheer quality of this wreck. After a couple of years fighting the weather and cold, a lot of divers seem to loose some of their original enthusiasm. If you are one of these, get yourself up to the Kyle of Loch Alsh and rekindle your spirit on a truly great wreck.