Scapa Flow, the largest and most godforsaken of all the harbours ever used by the Royal Navy, is the scene of one of the most extraordinary naval episodes in history – the scuttling of an entire German High Seas battle fleet.

On 21 June 1919, eleven battleships, six battle cruisers, eight light cruisers and fifty destroyers slowly turned over and sank to the bottom of the sea. Although some were subsequently raised and others were partly salvaged, many more remain lying in the clear and rainlashed water that surges between the windswept islands making up the anchorage of Scapa Flow. 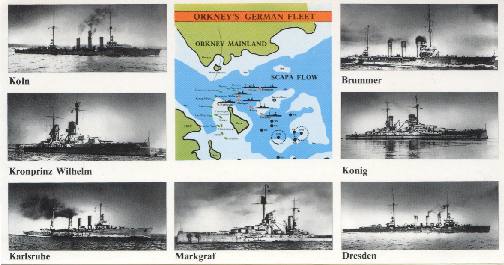 This is awesome diving, The sheer size of wonderships like the Konig and the Brummer are almost indescribable. And the fact that most are still intact right down to their portholes and guns leaves the wrecker almost speechless with delight.

Other wrecks are merely fantastic. Our boatful of divers voted the wreck of the F2 one of the most popular wrecks to dive. This was mainly because it was all so accessible and because people were not overawed by its scale.

Strangely enough, the F2 was not a victim of the events of 1919 at all. In fact, she was not even built until the start of the Second World War. And she was wrecked more by the carelessness on the part of the British than for any other reason. 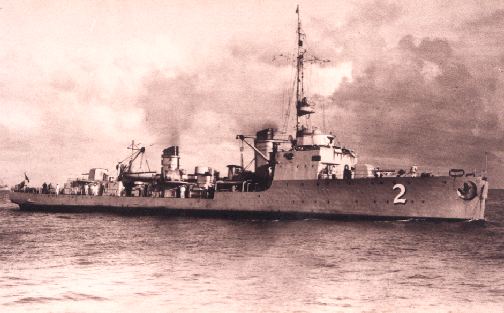 The F2 was built in 1935 by Germania as an escort vessel or Geleitboot of 756 tons. She was 249 feet long, twenty nine feet wide and had a very shallow draught of only just over eight feet. Unlike the Royal Navy, the Germans did not name all their ships, tending instead to christen only the biggest and the best. Lesser vessels like destroyers and escort vessels were designated instead by a letter and a number.

With two geared turbines, she could reach speeds of over twenty eight knots. For her crew of 124 this must have been purgatory. Although excellent sea boats, they were also incredibly wet and uncomfortable. They were not really designed to house a crew for long periods. Any heavy weather and the inside of the F2 would have been a real morale buster, even compared with the lower standards of their day. 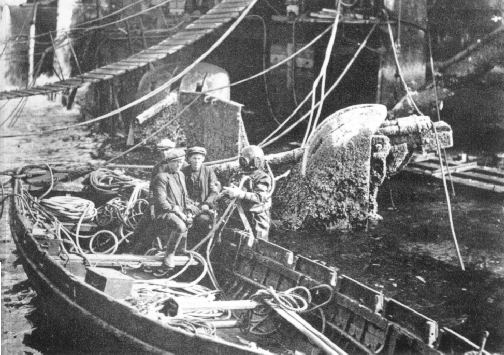 As well as being fast, the F2 also packed a sizeable punch. It had a 4.1 50 calibre gun mounted fore and aft, four 37mm machine guns and two one pounder guns for defence against aircraft attack. In addition, there wee also two sets of depth charge throwers for submarine attack.

If all that wasn’t enough, she could also be rigged for mine laying. All in all the F2 was a very useful and versatile ship, and it is not surprising that the Germans built scores of them. The F2 survived the war, and when the Germans surrendered, she was given to the British as part of their war reparations. The British took her to Scapa Flow in December 1946 to await further instructions as to her fate. 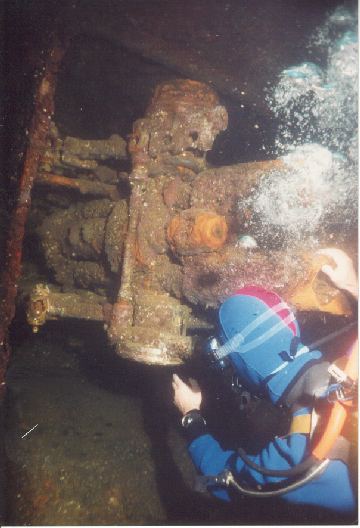 Inside the Gun Turret.

Quite what happened next is not clear. Suffice to say that she sank on 13 December 1946 in the channel between the islands of Hoy and Fara. She was not considered worthy of salvage. The F2 soon became a total loss. Most of the F2 today lies in just fifty feet of water. With the viz usually in excess of thirty feet, the sight of this wreck is staggering. The ship lies on her side, but the bows are completely intact with an entire 4.1 gun mounting still there. The gun seemed almost to be in working order, You can easily get right inside the gun mounting and look out through the gun slits, just as if you were part of the gun crew. Lying there on your side in the turret produces an optical illusion that makes the boat stand upright. There right in front of you are the bows flaring away, perfect in every detail.

Just back from the gun mounting are the remains of the bridge, which forms a huge overhanging cave as it sets onto the seabed. You can get inside, but it is a bit dark and a tight fit. If you poke your head underneath, you can avoid any potential embarrassment but still get the full flavour or what it would have been like. 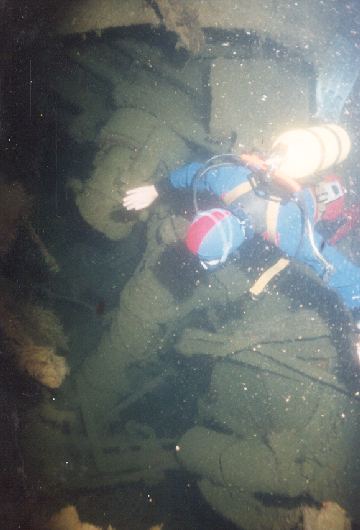 Looking down into the tangle at the stern.

Further back is the stern, all smashed up with iron plating everywhere. There’s masses of piping, broken stanchions, electrical cable and all manner of mangled bits and pieces. There should be another gun mounting, but I didn’t see one. This area is really interesting and if you have time, it is well worth a thorough examination, especially out on the sand just away from the wreck. There is plenty of broken pottery here, some with German markings.

Time starts to run out, but it is the bows and the guns that call you back for one last look. It really is a most magnificent sight.

As an encore, if the rest of your gang has not stirred up the sand too much, try this. Fin slowly towards the surface directly above the gun. When you get about ten feet from the surface, hold it and look back down. And remember the view – because there is nowhere else in the world where you can see anything quite like it. Fantastic!