The southern most tip of Africa is at Cape Agullas, and not as many people believe, Cape Point. The official position of the ‘Tip’ is 34 49′ 58" south , and 20 001′ 12" east. This puts the actual position about 1 km west of the Cape Agullas Lighthouse where it is marked with a simple cairn errected in 1986. 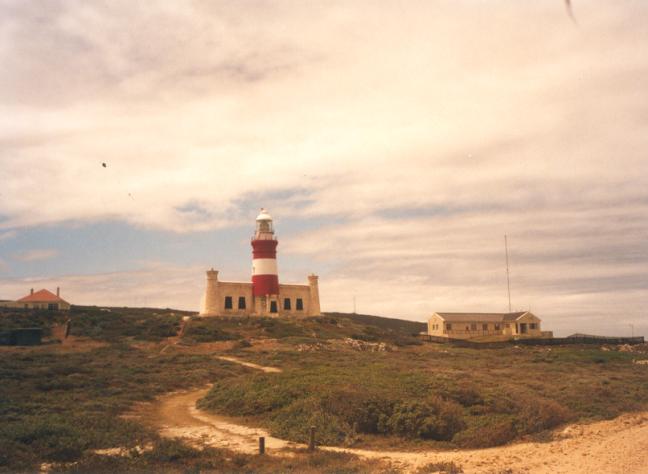 At the end of the 15 th century, the Portugese sailors christened the Cape ‘ Cabo das Agullas ‘ which means the Cape of needles. They called it this because here, a compass needle shows almost no deviation between True North and Magnectic North. In those days of privitive navagation insruments, this factor alone must have been the cause of many shipwrecks. Cape Agullas is also where the two oceans, Indian and Atlantic meet, with the warm Agullas current coming up from Mozambique in the Indian Ocean, joining the cold Benbecula current swirling in from the Atlantic. It is a wild and desolate streach of coast, swept by fierce winds and blanketing fogs, but it has a compelling kind of stark beauty. If you come here, you will almost certainly want to go back

Dominating the skyline is the Cape Agullas Lighthouse built in 1848 and the second oldest working lighthouse in South Africa. Today it houses a museam which gives a graphic account of all the different lighthouses in South Africa. About 4 km to the west of the lighthouse you can see the remains of the Meisho Maru 38, a Japanese fishing vessel wrecked in 1982. If you climb to the top of the lighthouse( 71 steps) you will be treated to a breathtaking panoramic view of what is the Southern most Tip of Africa.